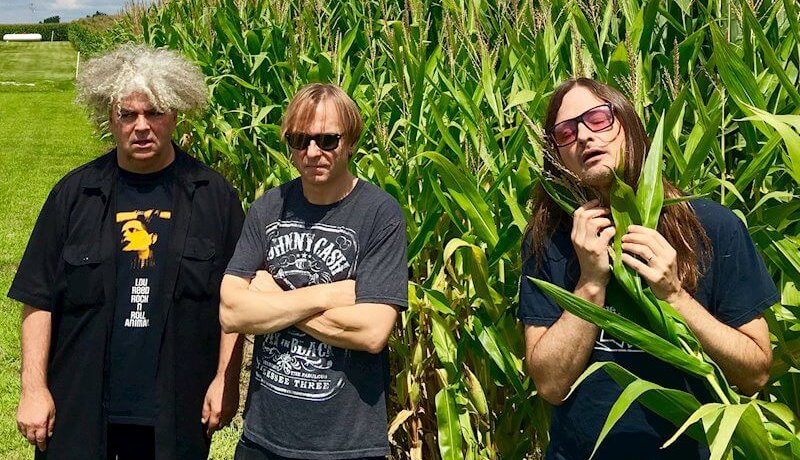 The thunderously unpredictable Melvins have been blowing (and confounding) minds for over two decades now, due in no small part to their ever-changing lineup of musicians supporting drummer Dale Crover and guitarist/vocalist Buzz Osborne.

Consider their latest release – Pinkus Abortion Technician – a titular ode to bass player Jeff Pinkus’ tenure in the equally unpredictable Butthole Surfers. It’s still the Melvins, but as always there are surprises. The album opener, “Stop Moving to Florida,” a mashup of the James Gang’s “Stop” and the Surfers’ “Moving to Florida” sung by co-bassist Steve McDonald of Redd Cross (who, along with Japanese noise artist Toshi Kasai, will be opening their September 23 show at the Waiting Room in Benson), and a weird, lurching cover of the Beatles’ “I Want To Hold Your Hand” are just two songs listeners can look forward to.

“That [“I Want To Hold Your Hand”] is actually a cover of a cover,” Osborne said from his home in Los Angeles. “The Moving Sidewalks, which was Billy Gibbons’ first band, did a smokin’ cover of that song. If you’re a ZZ Top fan, and if you like the 13th Floor Elevators, it’s kind of a combination of those two bands.”

Fans may be surprised at Buzz’s appreciation for ZZ Top, but he and his bandmates have broad musical tastes. Judy Garland, KISS, the Beach Boys and Tom Waits, to name just a few have been name-checked in Melvins interviews.

This time, I picked questions that some of those musicians had been asked to find out what Buzz’s take would be. As always, it was interesting.

Who do you regard as the greatest living or dead songwriter and why? (Pete Townshend)

Buzz: If you’re talking about rock music, I think John Fogerty is heavily underrated along those lines. He might be one of the greatest American songwriters. Proud Mary could be one of the greatest rock songs ever written. Townsend would be up there for me. I think his guitar playing is severely underrated. You hear about him smashing guitars but not playing them. The Who are Gods to me. There’s nothing like them. I think they’re arguably the best live band of the 60s.

Pete Townshend: Brian Wilson. Everyone I’ve spoken to says he remains perfect pop – frozen in time. When I met him recently after a long period all I could say was “I love you.”

How far will you take the merchandising? (Gene Simmons)

I am a big fan of it all encompassing one thing. I like the idea of people walking around with our band name and artwork on their clothing. I think that’s cool. We’re such an obscure band in a lot of ways. Our artwork doesn’t match what we sound like – that’s intentional. I don’t want to be that obvious. I don’t want it to be some kind of club.

My wife and I have worked together on lots and lots of merch over the past 25 years. We think the stuff we’re doing is really funny. We’re really into cute violence – that’s one of our favorite things. Cute violence always works. What’d Gene say?

Me: “I want to completely ruin all of our credibility…” (I didn’t really get to finish.)

Buzz: Credibility – Did he have any? (laughs) The thing is, I wouldn’t care about KISS if their songs weren’t any good. They have a lot of good songs. I would say “Detroit Rock City” would have to be in the top 20 of rock anthems. They did records I think are fabulous, like ‘Hotter Than Hell’ and the first live album. Say what you want about KISS, but if you don’t like them, you don’t like rock music.

Do you get recognized by people in the dog world? (David Lee Roth, who was apparently a dog trainer at the time of the interview)

No, absolutely not. [My wife and I] have had bad experiences with people in the dog world. We’ve tried to go and adopt rescue dogs and they take one look at my wife and I and they just run us through the ringer. They’ll ask us stuff like ‘what are you going to do with them?’ I don’t know, eat them? I just get offended and tell them to fuck off.

Our house is the best place to put a dog. They get massive amounts of attention, and they’re fully embedded in our life. They get good food, exercise, and great places to sleep. I don’t know what else you could want for a dog.

David Lee Roth: If you work with livestock, if you wear jeans to work, don’t tell me you don’t know Van Halen. That’s an in for me. I’m wildly enthusiastic about dog training; it gives me an entrée to travel the world.

What types of people do you find especially irritating? (Miles Davis)

Oh man. Know it alls. People who want to dictate my life and tell me what I should be doing or thinking. People who put me into a tribe because of the way I look.

I’m a severe individualist. I’m responsible for me, and me only. I hate anyone who will look at me and judge me based on the way I look. But I expect it. If you get to know me, you’ll probably like me. But don’t paint me with that brush.

Now, if I walk outside looking weird, I have to expect it to some degree. That’s okay. And I do expect it. I want to make sure that you know that I’m not like you. And with that comes baggage. That’s okay.

I hate people who refuse to think past Stage One. So you’re going to do this and then what? What happens as a result of all these plans you’ve made? Think, people, just a little bit.

Miles Davis: People that are always coming up bugging me until they get me to act like this crap they heard. They ask you things, you say what you think, and if it ain’t what they want to hear, then something’s wrong with you and they go away mad and think you don’t like them.

Do you find that fans you meet have a radically different idea of what you’re like from your own? (Tom Waits)

My life is radically different from what people think. I don’t cheat on my wife. I believe in living a relatively conservative life. I’m interested in sports. I love to exercise. I work out with a trainer. I’m heavily into art. I love to read. I love movies. But nothing has moved me more than music.

I’ve never been into anything other than the music. I pursue it in a way I’d appreciate it as if I was a fan. I have no clue what motivates people. Once in a while I agree with the masses, but I’m just too much of a critic.

I always approach music by creating music I’d appreciate as a fan. If I like it then they’ll like it. You have good taste. Might not be millions of people, but that’ll be enough. That has served me well. All art is communication.

I look at it as a Broadway musical. There’s a reason for that. Every second is important. It’s not a playlist. I’ll be scheduled for an hour and every minute of that hour is important. I’ll give you a gigantic piece of music not just song song song. We’ve thought this through and want it to work out for you. We want you to have an experience that you won’t have from any other band.