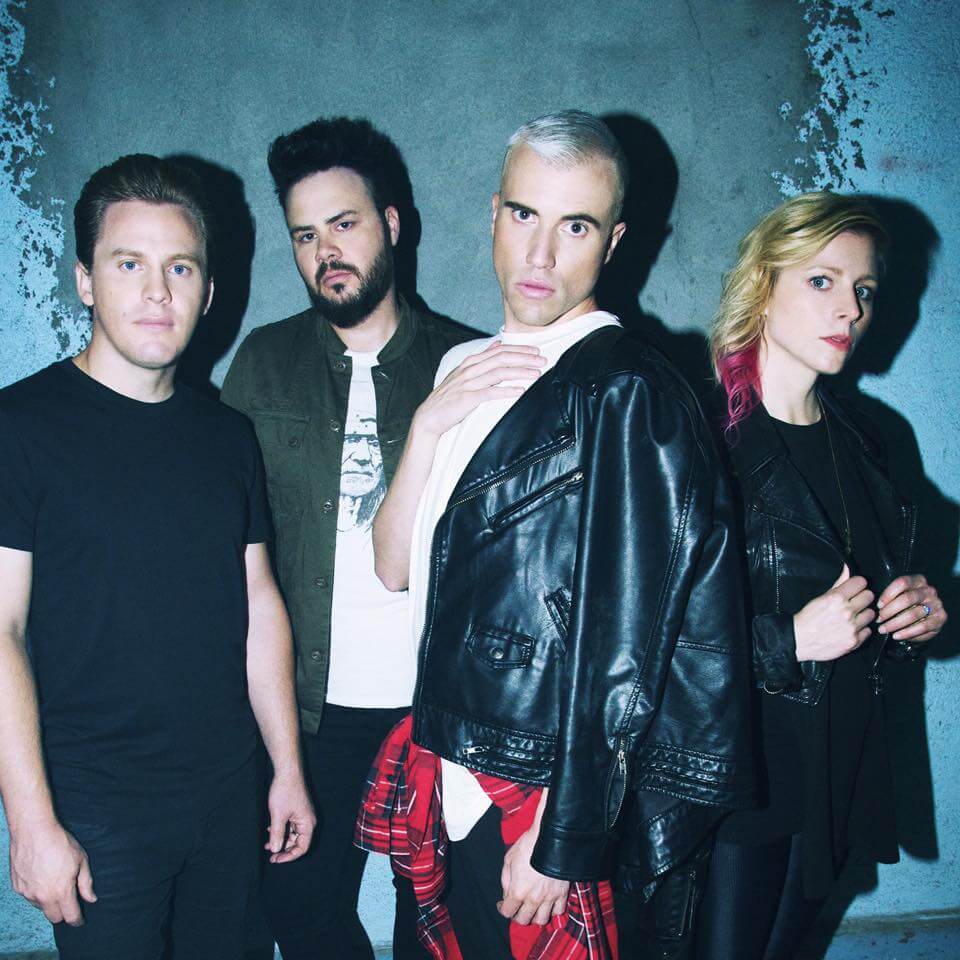 Poppy dance-punk (according to their youtube) band Neon Trees of Provo, Utah is taking it easy and having some fun this tour. They will be a part of the Stir Cove concert series in Council Bluffs this summer as part of their tour “An Intimate Night with Neon Trees,” the product of a band who decided a year-long hiatus was far too long without seeing their fans. The tour will be visiting smaller venues and playing songs from all three of their albums. The Reader got to talk with Elaine Bradley, who rocks the drums and occasionally joins in vocals.

Reader: Thanks for talking with me today, Elaine ! We figured we would chat with you and stir up some excitement for your show in Council Bluffs later this month.

Bradley: That’s great! As a side note, my father actually grew up in Council Bluffs so that’s neat. I’m not too familiar [with Council Bluffs] but I do love Omaha and Iowa City, so I will always have a special place in my heart for there.

Reader: Awesome! So you guys originally planned to take a year off but got bored and changed your minds. What were you doing with your time off?

Bradley: I was not bored. I had plenty to do. I was mothering two children, developing another in my belly, making lots of music. You know, my own stuff. So no, I wasn’t very bored but I’m excited to be doing the tour.

Reader: That’s right, you’re pregnant! Congratulations! How much does this affect you while you’re touring, how you play? I know this isn’t your first time being pregnant on tour.

Bradley: No, yeah, I was pregnant with my first child for the whole tour, actually up until about 7 months. This one will be a little longer even, so we’ll see how that goes. [laughs] It’s not so much that I have to change anything so much as it makes everything a little more uncomfortable. The way I play drums has to be modified because of the extra up front but other than that it’s not too bad. Pregnancy isn’t the ideal state to tour in but it’s not going to be bad (I hope).

Reader: So, speaking of you personally, when and how did you first get involved in music? When did you decide it was what you wanted to do?

Bradley: For me, music has kind of always been a part of my life for as long as I can remember. You know, I’m the youngest of seven so my older siblings were always playing music. Like, I have memories of doing dishes together singing Depeche Mode harmonies. That’s how I learned harmonies, with my siblings and Depeche Mode. So it’s really always been there. One of my favorite activities when I was like four years old was taking my Fischer Price tape player and recording radio shows. So I would do like the DJ, the music, the commercials, and the interviews you know? I was like the whole show. So I think I’ve always tended toward music and entertainment in general. Since I’ve gotten older, realizing that I have such a passion for making music and getting in front of people performing…it’s always been a part of my life, but it’s just become a stronger and stronger part, bigger and bigger. I don’t know if there was ever a point that I decided “oh, this is what I want to do” so much as it was always what I wanted to do, what I wanted to make work out. I think if I keep trying and am practical out of my life—you know, I went to college, tried to be practical—I think it will work. And I graduated college and joined Neon Trees in the same month so I’d say it worked out.

Reader: So, you said you were working on your own music. Do you have a side project going or plan to put it out under your own name? Or is it more just for yourself?

Bradley: Well, I hope it’s not just for my own amusement! [laughs] But I don’t really know what I’m going to do with it. I’m far too busy with Neon Trees to figure out what I want to do but hopefully it will see the light of day [voice drops dramatically low] and then you’ll know more.

Reader: Fair enough! So what are some of your personal inspirations?I know you said Depeche Mode but what else drove how you made music?

Bradley: Well, bandwise, Depeche Mode and [Led] Zeppelin were the two that I kind of grew up on and grew up loving, respecting, and almost studying. I was also really into sports and I do think that really does affect how I play music and why I play music. I love the thrill of being in sports, like basketball which was my favorite. So there’s a kind of thrill being in a band that’s kind of like a team, you know? Doing your thing together and playing in front of an audience, making the crowd cheer, practicing for it and rehearsing. It’s kind of a really similar thing. And you know, being a female athelete, at the time when I was really young there really wasn’t even the WMBA so there really wasn’t anything for me to strive for there. I chose music because it made more sense for me and it was probably more likely and mattered a little bit more. Athletics definitely played a part, and I think that’s why I like the drums. It’s a very physical instrument, the most sport-like.

Reader: So aside from the fact that you’re currently pregnant, do you still play sports?

Bradley: If I weren’t in the Neon Trees, I would probably do league and stuff like that. I get together with friends and shoot hoops and I work out, I still do that even when pregnant. I definitely like to keep going. I love golfing and racquetball is great.

Reader: What are some of your favorite songs or albums right now, anything standing out to you?

Bradley: That is a good question. Let’s see, what have I been listening to? Oh, you know, I love Ryan Adams’ self-titled album that I think he put out last year. That still has not gotten old. It’s one of the most perfect pieces of music with the tones, the guitar tones, the drum tones, everything about it. It’s so musically perfect and the songs are the types of songs are really simple but you didn’t write it so you’re like “man, that’s genius.” That’s the thing I’ve been most enamored with as of late. But my go-to is always The National and, um…I’m not going to lie to you, I really like some of the music from the tv show Nashville. That’s my…I’m not really guilty about it but I recognize that I SHOULD be guilty so it’s my sort-of-guilty pleasure right now.

Reader: So, just to finish up, what are you hoping to get out of this tour? Is there anything the audience can do to try to make it better? I know it’s going to be a different kind of setup, since the tour is named “An Intimate Night With Neon Trees” and you’re trying to go to smaller venues.

Bradley: We’re just excited to be playing in front of people who are excited to see us. You know, there’s this unmistakeable exchange of energy and emotion that happens between bands and the audience pretty much any time you play but especially in a smaller club or venue. We’re basically doing this tour because we wanted to see our fans again because they’re nice people and we enjoy playing for them and they enjoy us playing for them. It’s like this mutual exchange. I think people showing up will be enough, and we’ll bring our A game. Just come, everybody’s got to come!

Neon Trees will be playing the Stir Cove Concert Series at Harrah’s Casino in Council Bluffs June 26. They will be joined by Alex Winston and Yes You Are. Tickets are $35-$75 and can be bought through Ticketmaster. Check out Neon Trees’ new non-album single “Songs I Can’t Listen To” here so you can learn the words in time for the show.