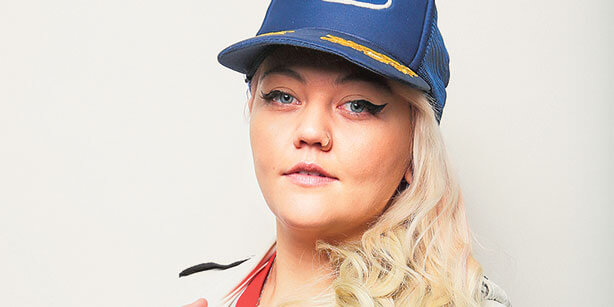 You could feel the excitement in the air as people lined up, waiting for their turn to enter The Waiting Room. It soon became apparent that this was not the routine procedure for the venue. As I approached the entrance, I noticed that there was additional security checking each patron with wands before they were admitted into the concert venue. Even with the increased security measures (for a threat posted on social media), the crowd cooperated and was seamless. Once in the venue, everything appeared as it normally would, but enough of that.

The opening band from Oklahoma City, Horse Thief, was a hit by enamoring the crowd with offerings from their latest CD Fear in Bliss, (“Devil, Little Dust” and “Dead Drum”), a welcome addition to their CD repertoire, including 2013’s I Am the Bear f. For many in the audience this was the first time they had heard Horse Thief, but I’m convinced it won’t be their last.

With the audience primed for the headliner Elle King, after a brief intermission to set the stage, the room lights were dimmed and when the lights intensified, Ms. King in all her glory was a strong presence on stage. A very engaging artist, Ms. King opened with “Jackson.” she immediately acknowledge the diversity of age among the audience and proceeded with her performance, which included the songs: “Can’t be Loved.” “Kocaine.” “See you Again,” “Woman,” “Good to be a Man,” a cover “Oh Darling” and of course “Ex’s and Oh’s.” Just when you thought the concert was over, the audience chanted over-and-over “one more song”! Ms. King appeased the audience with a few more songs, then, all-to-soon, it was over.

Despite the aforementioned threat, Ms. King, ever generous, stopped for autographs and pictures with fans until every fan present had the opportunity to meet her before seeking sanctuary and well deserved break on the tour bus. During the concert, Ms. King mentioned this was her first time in Omaha, but that it won’t be her last! An enjoyable evening, well worth checking into the next time Ms. King comes to Omaha.