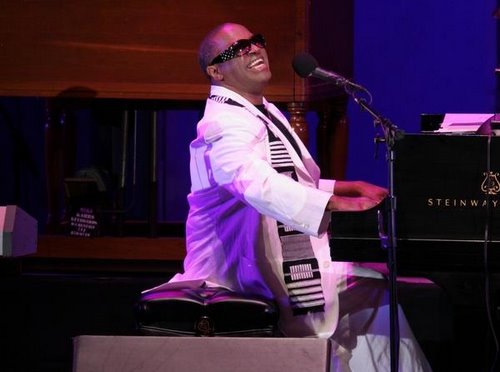 Though Ellis Hall began playing piano in third grade at the Perkins School for the Blind, he says he did not really make the decision to become a musician until age 14. He had snuck into a club, much to the chagrin of his mother, and said once he saw the looks on the faces of the gentlemen who were playing and saw the effect they had on the audience, he said to himself, “This is what I am supposed to do.”

His eyesight diminished over time due to congenital glaucoma and Hall was blind by the age of 18.

Hall has been in the music business since 1968 and said it has been an amazing ride. Certainly one of the highest points in his career was meeting and befriending legendary musician Ray Charles.

Hall’s affiliation with Charles actually came in the middle of Hall’s career and toward the end of Charles’ life. Hall was playing a local Christmas party in 2001 when he got word that Charles was in the audience. Hall said he immediately left the stage to meet Charles, while his band kept playing. He gave Charles a CD and after he listened to it, Charles signed Hall to his record label and the two started a friendship that lasted until Charles’ death in 2004.

The two had a great time working together in the studio and Hall said they had discussed the idea of going on the road together. Unfortunately, that idea never came to pass due to Charles’ death but Hall said he and Charles shared a similar outlook on their music.

“I always believed pigeonholes were for the turkeys that tried to put you in them,” Hall said. And Charles agreed. Hall said Charles taught him not to be afraid of any genre or style of music. He said that is why Charles signed him.

“If you play your music with honesty, whether it is rock, pop, soul or funk, it will come through and folks will want to gravitate toward that light,” said Hall.

This is the first time Hall will perform in Omaha and he said he is looking forward to it. He said he will have a few local friends in the audience for support, including keyboardists Chester Thompson and Neal Davis.

Hall’s performance in Omaha is a soul celebration that will feature some of Ray Charles’ most popular songs including “Hit the Road Jack,” “Unchain My Heart” and “Georgia on my Mind.” Hall said he may throw in one or two original songs that Charles signed him for as well. It is a celebration of music he has shared several times before, with orchestras such as The Boston Pops and The Ottawa Symphony.

Hall is joined in Omaha by conductor Matt Catingub, whom he’s worked with many times before. He calls Catingub “brilliant.”

The two like to tell folks, “Get on the train or get out the way, because there’s a soul celebration coming through. And if you hold it inside, you could hurt yourself.”

For Hall, playing with the symphony, an 80-piece orchestra, full of its live horns and strings, sounds so good to him that he said he almost forgets to sing sometimes. The symphony plays the music that Hall loves to celebrate and he said there is nothing better than that.

Those attending should feel as if they are in Ellis Hall’s living room. That is how he approaches each concert. He likes to tell some crazy jokes, celebrate the music and himself as a personality.

Hall lovingly said, “It is about the music and making you feel deliciously good.”

He hopes audience members walk away after the concert having lived, having laughed and having a song inside them that they will hopefully walk away with and share with others.

For those who want to take that feeling with them, Hall will have CD’s on sale at the concert, including his newest, Ellistrations. The CD includes a variety of different genres, including some blues and some gospel. He said the songs will make you think about how life flows along.

Ellis Hall’s Tribute to Ray Charles takes place Saturday, January 14th at 8:00 p.m. in the Holland Center. Tickets are available at omahasymphony.org or by calling 402-345-0606.