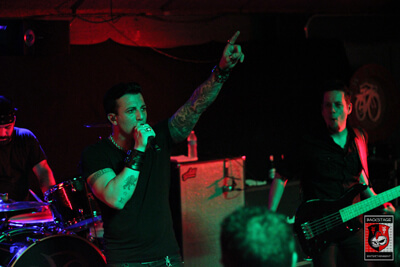 Shamrock’s Pub and Grill hosted the band Eve to Adam Saturday, September 28th. Many Backstage Entertainment fans will remember the two interviews we had with the guys before as they’ve been in the Omaha area before. It’s great developing a friendship with certain bands and them remembering you each time they come back in town. This was the case with the guys in Eve to Adam as we’ve had really fun interviews in the past.

This night was no different. The guys invited us on their bus to talk to them about the new album, “Locked & Loaded,” and how their tour has been going so far. As in all of our interviews, the guys had the chance to draw questions from the “BSE Box” and let out some of their crazy stories and wild side to the tour life. From talking about a crazy story with the band Creed, to who they’d want to sleep with most, as well as getting Jeremy from Backstage Entertainment to draw a question, this interview was probably the best one so far.

During the night, Backstage Entertainment also captured some live photos from the show. Be sure to check the links below and watch the interview. Also be sure to pick up Eve to Adam’s new album, “Locked & Loaded,” now!

Live Photos from the Show