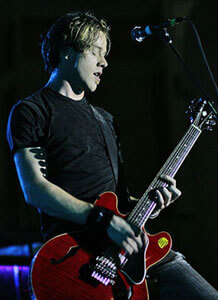 “Sorry I couldn’t answer the phone a moment ago. I’m in the middle of rehearsal and the band mates and I were playing a song that’s about 8 minutes long. I couldn’t stop in the middle of it.”, apologized the frontman and lead guitarist for the Australian-bred, L.A. raised rock band Sick Puppies’ Shimon Moore.

The Sick Puppies are busy preparing for their tour in support of their third full length album “Connect”, which will bring them to Omaha’s Sokol Auditorium Tuesday, July 16. When they make their way to Omaha it won’t be for just any old performance. Sick Puppies are treating the denizens of Omaha to their official c.d. release show.

I kept the interview brief to minimize the disturbance of the band’s mojo during rehearsal, so we kept focused on their new album, Connect and how the band’s sound has evolved since their 2006 Youtube Video of the Year for “All the Same”. The video supported the Hugs for Free Campaign that originated in Sydney Australia and helped launch Sick Puppies to the world stage.

It’s that sort of digital media know how that Sick Puppies use to their advantage to not only interact with their fans but, also attract a wider audience. A perfect example of this is Sick Puppies World Crew. Says the official World Crew website (sickpuppiesworldcrew.net), “SPWC is the official band-owned site where you can CONNECT with Sick Puppies and with other fans. World Crew members help Sick Puppies achieve their goal of world domaination—one fan at a time.”

The title Connect brings this idea home. When asked how that interaction with the fans helped mold the finish product, Moore didn’t hesitate when he said it was definitely a lot. “We already knew which direction we wanted to go but, once we started getting reinforcement from the fans saying, ‘Yeah, we want to hear that.’ Examples would be Emma Anzai (bass player) singing more, more chord progressions form certain album tracks and more lyrics like the ones on “Odd One” and “Maybe”. We were really able to tap into a lot of emotions lyrically.”, elaborated Moore.

There is a quote from Moore on the band’s official website (sickpuppies.com), “There are two ways to shoot yourself in the foot – never changing … or changing to much.” I asked him to explain what he meant and how the band applied the idea to Connect. Said Moore, “Just because you can shred and you can play a million notes an hour and you can do a drum solo doesn’t mean that you should every time. Changing to much just because you can is not good because then you’re not going to have any familiarity with your audience when you should be developing a relationship. But, at the same time, not changing is like … I’m trying to think of an analogy that’s not sexual. Basically, if you do the same thing over and over again, somebody is going to leave. You need to keep it spicy. You need to keep it interesting. If you don’t provoke thought of any sort, they’re not going to remember your music. It would just be a soundtrack to a moment rather then a soundtrack to a life.”

When I asked Moore to assign Connect with a color, smell and taste, he quickly replied with the following.

Taste: The hot wings at Buffalo Wild Wings that are really spicy but, cool down to a sweetness very quickly afterwards. I think they’re titled Sweet N’ Spicy.

I’m not sure what to make of the color and I’m not much of a perfume man but, the taste response definitely picks up on Moore’s idea of keeping it spicy and interesting.

How has Sick Puppies’ sound evolving on Connect? “Musical. Much more musical. That’s the word that keeps coming up. We took a lot of Beatles chord progressions and Beach Boys melody concepts, that sort of style, and made sure the songs were doing all the work but, while making sure it sounds like us when we play.”, said Moore.

Connect is an album for the fans first and foremost. Throughout our interview, Moore repeatedly brings up the concept of connecting with fans and vice versa through the online platform. “(That idea) is what caused us to title the record that. It was already lyrically themed that way and once we were conversing with fans with social networking, it just seemed to make sense.”