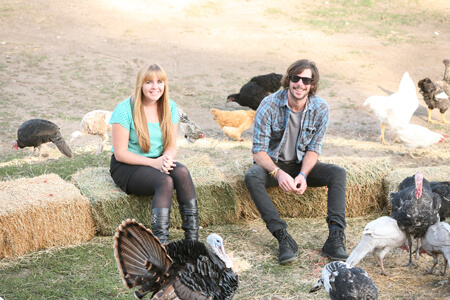 One overnight experience brimming with music and dedicated to alleviating hunger will resonate with the Omaha community early this fall.

Farm Fest 2012 was the brainchild of Ronda McCarthy. McCarthy’s cousin, Laura Ballard, passed away on Easter 2011 from cancer.

Ballard had a conviction to helping the Omaha community, from North to South Omaha and into West Omaha. Location did not matter; it mattered that help was needed.

Ballard had a strong tie to a garden intended to comfort the losses in North Omaha near 38th and Fowler. McCarthy ventured to the garden after her cousin’s death in hopes to make it lush again. It was there McCarthy knew she needed to keep her cousin’s philanthropy alive on a larger scale through Farm Fest 2012. Luckily, McCarthy had her own farm in mind as the perfect venue for her event.

McCarthy had a musician ready to jump-start the process of gathering bands, so she contacted Andrew Janousek of Rock Paper Dynamite. Janousek happens to be a long-time friend of McCarthy’s.

Janousek plays guitar in Rock Paper Dynamite. When asked about their sound, Janousek elaborated, “It’s southern rock with dance, grunge and a pop twist.” Janousek also is a chief songwriter in the act along with a spot as backup vocalist.

Janousek said the band considered bringing in bands from a national level. However, after considering that Farm Fest is intended to strengthen the Omaha community, he stuck with local acts. Janousek isn’t just excited to have a memorable night; he’s more than ready to bring Omaha and the surrounding areas together for a common cause.

About 15 other bands can be expected. Alpha 5 is among those and McCarthy said they definitely channel a punk vibe. Blue’s Dilemma will be there and they specialize in, well, blues! Mose Pray, Lil Slim, Edge of Arbor, Two Drag Club, Landing On The Moon, Brad Hoshaw, Matt Cox Band, After Thoughts, Swampboy Blues, Hector Anchondo, Jill Marie and Travelling Mercies will all be sharing their diverse range of musical creations with the audience.

The reaction to having an event to help the hungry was  overwhelming as it spread across the internet. “I even had to turn bands away. I was humbled by the response,” said McCarthy.

Nobody is really funding Farm Fest, it’s just being coordinated by McCarthy and support of the bands playing. McCarthy said the purpose of Farm Fest being overnight is to experience a night as the homeless do. Sleeping on the ground, eating staple foods and being on a farm left unsanitized with roaming animals is all part of the immersion said McCarthy.  Ballard’s four daughters get to decide where the donations go.  Ballard reached out to so many corners of town; it’s hard to say where the food may go.

The whole night is both a celebration of Ballard’s life and a call to action for the continuation of her involvement and empathy for the community.

McCarthy added the night is especially meant for Ballard’s four daughters and her husband, Ed Ballard. “We’re coming up on a lot of first milestones without Laura,” said McCarthy.

There is no limit on how many people can attend. McCarthy pointed out there’s 80 acres of land on the farm near Louisville, Neb.

If you come, also look forward to face painting, family events, and local artists selling jewelry and glass work. McKenna’s Blues, Booze and BBQ will be serving food throughout the whole event, so don’t miss some tasty BBQ!

No outside glass is allowed along with pets, as the farm already has many animals.  The first 200 people can use tents, and bonfires will be provided. Bring your own supplies for whatever may be needed outdoors. Farm Fest runs rain or shine.