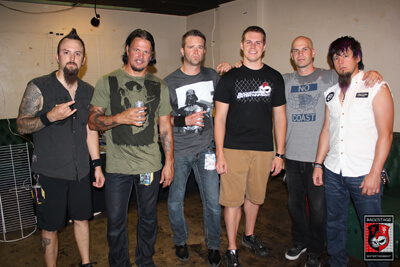 Since Disturbed decided to go on hiatus all of the members are now with other bands. A few months back, David Draiman and his new band, Device, came to Omaha and performed at Sokol Underground. Now, on Tuesday, August 20th the band Fight Or Flight headlined the Underground. Two members of Disturbed, Mike Wengren and Dan Donegan, have formed this new band with Evans Blue lead singer, Dan Chandler. Also joining the band is Sean Corcoran and Jeremy Jayson.

Along with Fight Or Flight on this tour is the guys in Mindset Evolution. It was a big day on the 20th for these guys as their first national album was released. “Brave, Bold & Broken” came out that day and the band told us a funny story during our interview with them before the show. The guys in Fight Or Flight went to the Best Buy in Council Bluffs, IA, and bought all copies and wanted to guys to sign one for them. One of the members said it was the best moment of his life to have Dan Donegan ask for his autograph.

Also performing that night were the guys of Faded Black from Lincoln, NE. They were thrilled to open up the show for these two bands and had their manager to thank for helping them get on the show. All three bands played to the people in the Underground as if they were playing a big arena and the energy in the place was high.

During the night, Backstage Entertainment got a chance to interview all three bands to talk about the show, what’s coming up for each band, their new music, and more. Make sure to check out the links below to watch the interviews and see the photos from the show.

Live Shots of the Performances