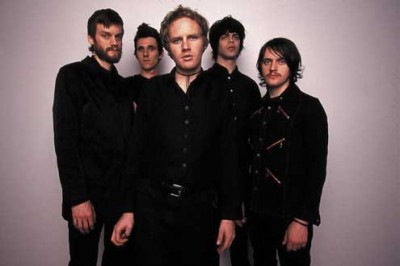 The Faint are back.

Actually, they’ve been back for awhile. The electro-punk four-piece who, along with Bright Eyes and Cursive, helped define Omaha as the nation’s indie-rock ground zero in the early 2000s, went on what many thought was a permanent hiatus after touring their last full length, 2008’s Fasciinatiion (blank.wav).

Frontman Todd Fink became a happy wanderer, moving from place to place with wife Orenda Fink (of Azure Ray and O+S fame), but eventually discovered there’s no place like home, or in this case, Omaha. Hopes were raised that The Faint might be getting back together when a photo of keyboardist Jacob Thiele in The Faint’s Enamel studio was posted on the band’s Facebook page in April 2012 with the caption “First practice in too long!!!”

In November of that year the band, now consisting of Fink, Thiele, drummer Clark Baechle and guitarist Dapose, went on a “10th Anniversary of Danse Macabre” tour and self-released a limited-edition four-song single, “Evil Voices.” It would foreshadow the band’s first full-length in six years, Doom Abuse, released this past April by SQE Music.

More than a return to form for the band that taught Omaha how to dance, Doom Abuse is a high energy tour de force — 12 relentless tracks of hard, fast electro-punk that feels more aggressive and immediate than anything they’ve released in their 16-year career.

“We came back with a perspective of what we each liked about the time we spent in the band, what felt good about what we’ve done, and what felt extraneous,” Fink said via cell phone. “We also realized we didn’t want to come back and put out a record that has a whole bunch of slow songs on it. We made it thinking how fun it would be to tour. That’s part of what’s exciting about being in a band again, that we’re going to go play music.”

Known for taking months if not years to record their albums, Fink said the band has a new attitude about the creative process, which in the past was too exacting and fraught with constant second-guessing of every decision.

“We’d made the process of making a record harder than it was fun,” he said. “This time we weren’t scared of failing because we didn’t care if we failed, and that’s the kind of attitude we remembered having when it was fun, back at the beginning. If it didn’t work and everyone thought (the music) sucked and didn’t want to come to the shows, we were cool with that.”

The new attitude freed the band to set up a recording schedule and book time with producer Mike Mogis. While the band laid down tracks at Enamel, Mogis handled the mixing chores, always staying one day ahead, not giving the band the chance to slip back into its old habits of second-guessing every little nuance of the recording.

“If something needed to change when we listened to the mixes, we’d get out some of Mike’s analog gear and old synths and start coming up with solutions in the control room,” Fink said. “It’s fun to make music with the group we have now.”

The Faint isn’t the only band Fink has fun with. Last year he showed up on stage playing synths as a new member of Digital Leather. Fronted by Omaha transplant Shawn Foree, the band is known for its synth-heavy recordings that recall artists such as Gary Numan and Suicide. At the time, Foree and Co. had been performing completely synth-free as a three-piece garage punk band.

“I was a fan and saw them play at O’Leaver’s without keyboards and wondered why it was like that,” Fink said. “Shawn and I met at California Taco, and then I brought my keyboard over to practice. I’m playing in the band because I like it and I like him.”

Fink said Foree’s songwriting style has been influential. “I feel like I learned stuff playing with Shawn about writing songs, whether they’re arrangement choices or approaches to lyrics,” he said. “I would definitely say he was an influence for me personally on this last set of Faint songs.”

In fact, Faint track “Damage Control” is a reworking of a song recorded by Foree side project Mere Mortals called “B12,” and appears on Doom Abuse. Fink said he and Foree have been writing and recording together, but that project has been set aside since The Faint began touring this past April.

Fink said the decision to release Doom Abuse on SQE Music — a label whose roster includes CSS, Johnathan Rice and Brandan Canning of Broken Social Scene — instead of Saddle Creek was purely business. “There’s no hard feelings one way or another (with Saddle Creek),” Fink said. “We’re still planning on doing stuff with them.”

He added the band decided to not release the album on its own blank.wave label because “it’s more work that’s not music. We’re trying to spend as much time as we can on the art and less on the business strategy.”

The business side of things always have been an after-thought for The Faint. “I don’t think we really talked about record sales or profits much over our whole career,” Fink said. “I know record sales have gone down in general, and streaming is the latest controversy. We don’t see any money from streaming.”

Fink admits that the band has been out of touch when it comes to the latest online crazes. “We’re a strange band in the world because we didn’t pay attention to internet stuff or social media as it was getting popular,” he said. “We were around before that stuff and didn’t change our ways.”

For The Faint, it’s always been about touring, but being on the road has gotten harder over the years. Fink, who just turned 40 this past spring, suffers from rheumatoid arthritis, a chronic inflammatory disorder that typically affects the small joints in hands and feet.

“I’ve always had it,” he said. “My ankles and my knees get swollen. It might bother me more as I do more shows in a row these days than it used to. We built days off (into the tour). We never took days off before. It’s good to give it a rest.”

It’s also nice to have the comfort of a tour bus to recuperate in between gigs, though Fink said he prefers sleeping in hotels and traveling in vans.

“Actually, I miss staying at people’s houses on tour,” he said. “That was a fun part about touring with Digital Leather — driving around in a van and seeing the coutryside pass by instead of black windows, and meeting people and staying in their houses. It was just like old times.”

The Faint plays with Reptar and Solid Goldberg Friday, June 13, at Sokol Auditorium, 2234 S 13th St., and with Reptar and Digital Leather Saturday, June 14, at The Waiting Room. 6212 Maple St. Showtime for both shows is 8 p.m. and tickets to both are $20. For more information, go to onepercentproductions.com.