The BSO Presents 6 p.m. Thursday shows at Chrome Lounge continue with the versatile and highly entertaining guitar-driven sounds of Jason Elmore & Hoodoo Witch Thursday, May 3. Dwayne Dopsie & The Zydeco Hellraisers raise the roof Thursday, May 10. The New Orleans-based artist is following in the family tradition as a Zydeco player. He’s a 2018 Grammy nominee and has received multiple “Best” awards from NOLA’s Off Beat Magazine. The phenomenal Seth Walker Band is back Thursday, May 17, with a show that mixes stellar musicianship with dance-floor filling rhythms embracing jump-blues, Americana and New Orleans styles. Dynamic east Coast blues-rock guitarist Dennis Jones is up Thursday, May, 24. Thursday shows are 6-9 p.m. Chrome Lounge is located at 8552 Park Dr. in Ralston.

Sunday, May 27, the Blues Society of Omaha hosts legendary soul-rock band The Cate Brothers for a party under the big tent at the River City Star. Also on the bill are rockin’ Memphis-based harmonica player and singer-songwriter Brandon Santini and his great band at 5 p.m. BluesEd bands will kick the day off starting at 3:30. Admission is See omahablues.com for details, admission cost for the Cate Brothers show and information on all these shows plus a curated list of blues events in the metro.

Fans of jump, swing and New Orleans style music have two chances to catch critically acclaimed audience favorites Davina &The Vagabonds. This band swings and sizzles with plenty of soul and sass as their keyboard and horn-driven show delivers a “new spin on an old sound.” They play two back-to-back shows at The 1200 Club at Holland Performing Arts Center Thursday, May 10, 7:30 p.m. and Friday, May 11, 8 p.m. See ticketomaha.com for advance tickets.

A couple of big shows are on the horizon you might want to start planning for now. This is the 20th Anniversary year for the Blues Society of Omaha. The local non-profit has some activities planned throughout the year to celebrate including the Thursday, July 19, show just announced with Austin blues legend Jimmie Vaughan. Stevie’s big brother and Jimmie’s band Tilt-A-Whirl will perform at Chrome Lounge. Vaughan is a stellar live performer with a top-flight band. This will be a great show.

Hoodoo favorite Dave Alvin is releasing a new CD that is a collaborative project with Jimmie Dale Gilmore. Titled Downey to Lubbock (Yep Roc) the disc will drop June 1. See DaveAlvin.net. The two will hit the road this summer for tour dates that include a Sunday Roadhouse show at Waiting Room Sunday, Sept. 2, 5 p.m. Advance tickets are available now at SundayRoadhouse.com.

Kris Lager Band’s annual May Hullabacruises on the River City Star are Friday and Saturday, May 11 and 12. May 12 is already sold out, check out krislager.com to purchase tickets for Friday, May 11, while they last. KLB will also perform a special acoustic show at Reverb Lounge Sunday, May 20, 7:30 p.m. The Reverb show is the official Omaha celebration for the band’s latest disc, Love Songs & Life Lines. The disc had its release April 24.

The unclassifiable coolness that is Southern Culture on the Skids (SCOTS) takes over Waiting Room Tuesday, May 22. The band mixes southern-fried rock, rockabilly and roots music with some high-haired retro antics. I once got hit by a piece of fried chicken being thrown from the stage at a SCOTS show. Wagon Blasters open.

Blue House & The Rent To Own Horns play a free show in Stinson Park at Aksarben Village as part of the park’s summer concert series Saturday, May 19, 7-10 p.m.

Hector Anchondo is getting back to work after an emergency gallbladder surgery in April. Catch the Hector Anchondo Band with guests BluesEd band Far & Wide Saturday, May 19, 6 p.m. at Chrome Lounge.

Catch Zoo Bar shows including Big Sandy & His Fly-Rite Boys Tuesday, May 8, 6-9 p.m. and Josh Hoyer & Soul Colossal with Sidewalk Chalk Saturday, May 12, 9 p.m. Check out all the latest shows on the Zoo calendar at ZooBar.com.

Remarkable singer-songwriter-guitarist and writer Eric Taylor has been covered by friends including Lyle Lovett. Taylor is a mesmerizing storyteller and performer. He brings his talents to the FolkHouse concert series Saturday, May 19, 7:30 p.m. See bluerubymusic.com and visit folkhouseconcerts.com for details. 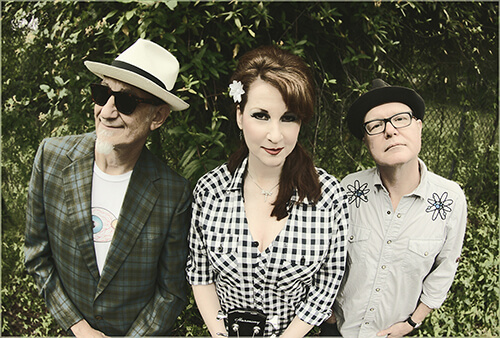