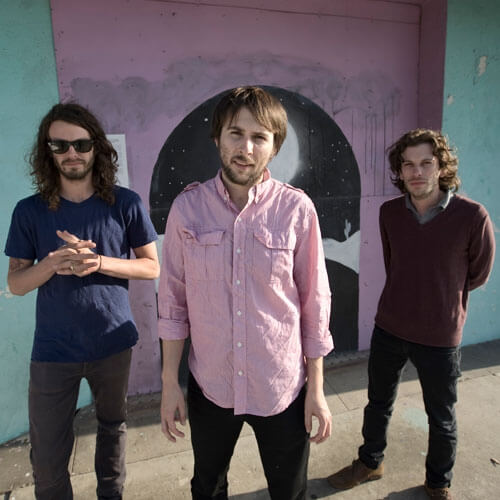 Jason Cupp, the album’s producer, has fallen in love with the space, owned by Bright Eyes’ member and fellow producer Mike Mogis and his brother, A.J. Since working on the Good Old War album, Cupp brought Maps & Atlases to town as well.

Cupp has played a role in making all three Good Old War albums, but this was an evolution in the process for both the band and the producer.

“This was the one where he really got his hands dirty,” Arnold says.

The album also saw more collaboration between all three members of the band. Arnold says the changes in the band’s writing and recording process was a comfortable and welcome alteration.

“It was a different experience because he all had our hands in the writing,” he says.

The album takes the band’s acoustic indie pop/folk sound up a notch, adding pop song clarity to the harmony-rich mid-tempo songs. The album’s definiing moment may just be “Calling Me Names”, which Arnold and singer/multi-instrumentalist Keith Goodwin co-wrote.

It started with Arnold on drums, playing different grooves. Then Goodwin played a melody on piano over it and the two wrote the chorus hook from there.

“It spawned from just a beat,” Arnold says.

Goodwin and Arnold have been in bands together for the last 10 years. Good Old War started as their previous band, Days Away, was dissolving. So they embarked on an acoustic project, eventually recruiting guitarist Dan Schwartz.

At first, the harmonies were sung just by Schwartz and Goodwin, but eventually Arnold decided to add in his voice too.

“We wanted to make it really simple,” Arnold says.

At the same time, their friend Anthony Green, lead singer of Circa Survive, embarked on his own solo project, enlisting the trio has his backing band both in studio and on tour.

Despite the fact that Good Old War’s stock is rapidly rising, Arnold says the band is still open to playing with Green whenever the opportunity arises.