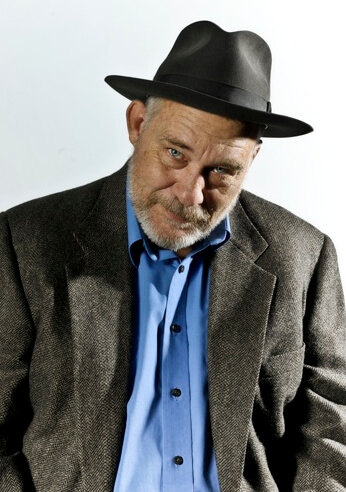 December marks the annual effort by Omaha roots musician Lash LaRue to bring toys and holiday cheer to the children and families on the Pine Ridge Reservation. Conditions on the reservation are harsh, with one of the worst rates of poverty in the U.S., high drop-out and teen suicide rates. People face a variety of health issues including increased rates of diabetes and cancers. Since 2003 the Toy Drive for Pine Ridge has worked to give the youth on the Reservation some hope and joy at Christmas.

When asked about how the Toy Drive has grown, LaRue, also known as Larry Dunn, was thoughtful. “I was thinking earlier this year about that first year and realized, the kids we met that year are now college age! The first year it was just my friend Steve and myself with a pickup load of toys and now we take a Mack truck full of toys, and a crew of between 5 and 10 people to help distribute. We also have branched out with the propane fund and are helping a local school. We are also looking into starting a college scholarship fund.”

LaRue remains dedicated to the Toy Drive for several reasons. “The children, obviously. Once you’ve done something like this and spend time with the children and see their faces when they get gifts, it’s hard to not keep going. The other thing that keeps me going is all the people who have helped and donated and really invested themselves in this cause. It amazes me every year to see the numbers and diversity of the people who are touched by this cause and also to see how their lives are touched by participating. I really like being a part of the catalyst for that sort of thing.

“And also, my daughter. I was single with no children when I started the toy drive. Now I am married with a three-year-old daughter and a stepson. That changes many things in a person’s life. I think about how I would feel if I couldn’t have gifts for them at Christmas and I also have the great responsibility to teach them about giving and looking out for your fellow human beings.”

This year’s events launch with our annual appearance on KIWR 89.7 The River and Rick Galusha’s P.S. Blues radio show Sunday, Dec. 6, 9 a.m.-noon. Each year The River and Galusha are generous enough to turn some air time over to LaRue to spread awareness and raise donations for the Toy Drive. We’ll be joined by in-studio musical guests and it is always one of my favorite days of the year.

The rest of the Toy Drive events include the Blues Society of Omaha Holiday Party and Toy Drive show. The afternoon event at The 21st Saloon is Sunday, Dec. 6, with music starting at 3 p.m. featuring Hector Anchondo, Lash LaRue & The Hired Guns, Little Joe McCarthy and the Rex Granite Band featuring Sarah Benck.

Admission to the concert events is $10 or a new, unwrapped toy of equal or greater value.

To learn more or contribute to this year’s Toy Drive see toydriveforpineridge.com/announcements.htm.

The 21st Saloon Thursday Blues Series continues bringing great touring blues bands to Omaha with a line-up that includes the rockin’ blues of Texans Jim Suhler & Monkey Beat Thursday, Dec. 3. Suhler brings a versatile guitar firepower to his original tunes with a band that is equal parts charisma and musicianship. They always rock the house.

A few special shows also happen at The 21st this month from the Dec. 6, 3 p.m., Toy Drive for Pine Ridge show to a special Saturday show Dec. 12, 8 p.m., with popular blues-rock guitarist Mike Zito and his band The Wheel. Zito is another audience favorite whose rockin’ blues guitar and vocals were also an integral part of the original line-up for Royal Southern Brotherhood.

The 21st closes out the month with a New Year’s Eve show that should appeal to all kinds of music fans: Moreland & Arbuckle. Their swampy, hard-driving roots-blues mixes raw traditional North Mississippi hill country, Delta and Chicago blues sounds with roots and folk traditions, all spun with rocking energy. The band is based in nearby Wichita, Kansas, and recently signed with Alligator Records, which will release the band’s label debut in spring 2016. See morelandarbuckle.com.

Lincoln’s Zoo Bar brings music from local and touring favorites, including Hoodoo favorite Jon Dee Graham, who takes the stage Wednesday, Dec. 16, 6-9 p.m. His music is passionate, joyous and optimistic in the face of obstacles. He is an extraordinary songwriter and guitarist who is a three-time Austin Music Hall of Fame inductee. He also is a recipient of the Musician of the Year in the Austin Music Awards. Graham’s career as a guitarist includes stints in the seminal Austin punk band The Skunks and he was one of the three fiery guitars in another extremely influential Austin band, the True Believers. It was in the Believers that band mate Alejandro Escovedo started pushing Graham to sing the songs he was bringing to the band.

Roots songwriter Jason Isbell says “Jon Dee Graham is the Titan of American songwriters.” While up and coming singer-songwriter John Fullbright raves “Jon Dee Graham is the silver lining, reluctant as he may be about it. He’s humor in heartbreak and tears at a wedding. He’ll break the fifth (and sixth) wall and pull you with him to a world of darkest nights and brightest days. In two words: sucker punch.”

Graham’s most recent disc, Do Not Forget, is a curated collection of “fan-sourced bootlegs” of live performances, most of them from independent tapers across the world who have been recording Graham’s shows since 1992. Included on the CD is an appearance by Lincoln’s own Josh Hoyer, featured on one of Graham’s most notable compositions, October. See jondeegrahamco.bandcamp.com/album/do-not-forget and jondeegraham.com.

Graham is on tour with Mike June, a singer-songwriter whose music reflects the 200-plus nights a year he is on the road performing in small clubs, house concerts and other grassroots venues. June says he spends a lot of time on highways and in conversations with mostly for working-class folks whose stories and struggles he reflects alongside his own in his music. His lastest disc is Poor Man’s Bible. See mikejune.com.