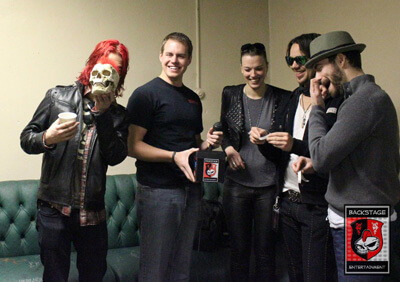 For quite a while now we’ve known about 89.7 The River bringing Halestorm back to the area to perform at Sokol Auditorium in Omaha but not many people anticipated the event selling out so quickly. Along with Halestorm, In This Moment and Eve to Adam were on the bill to perform. When word got out that the show was sold out many people went online to try and buy tickets but you had to spend a pretty penny to get into the event if you didn’t get your tickets early. Many people were seeing tickets after the event sold out for around $200-300 or even more.

Backstage Entertainment got a chance to speak with Halestorm a few hours before the show started and asked their thoughts on what they think about tickets selling for that much. Also what it’s like to have multiple shows on this tour selling out across the country. The band also shared some stories from the road and some onstage mishaps that they’ve encountered.

Later that night we also got a chance to speak with the guys in Eve to Adam. Toward the end of the interview we had a couple of the Jägermeister Girls talk about what they were doing at the show since the concert was sponsored by them. Eve to Adam shared some new stories with us since we talked to them a year ago at the Whiskey Roadhouse and let us know that 2013 is going to be very big and exciting for them.

The show was nothing short of amazing and each band performing brought the energy the whole night. If you talk to any of the people who got tickets after the show was sold out and had to pay way over cover price, they would probably say it was worth it.