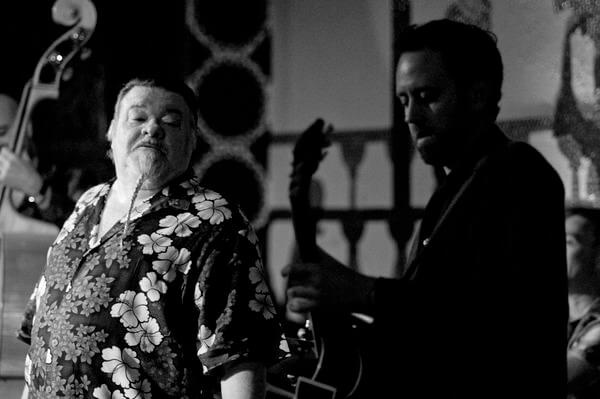 Josh Hoyer & Soul Colossal take the stage at The Harney Street Tavern tonight, Friday, May 27, 9 p.m. for a free show.

Other shows going on Friday night (May 27) include the return of popular local swing band The Prairie Cats with a performance at Jitterbugs’ Night Out, 24th & Douglas at the Eagles Club, 9 p.m.

East coast vocalist Gina Sicilia and her band hit the Corner Bar in Fremont Friday night, for a 5 p.m. early show. And The Mighty Jailbreakers will be at Alley V, 3375 Oak View Drive, tonight from 7:30-11:30. See thevomaha.com for more info on this bowling alley venue.

Lippy’s BBQ in Malcolm, NE, near Lincoln, presents their annual Blues Fest, noon to midnight Saturday, May 28, with Billy Bacon & His Porkestra, Josh Hoyer & Soul Colossal, Tim Budig Band, Kris Lager Band, Tijuana Gigolos, Hector Anchondo Band and Sweeney/Steerley. $14 admission. Website mentalfloss.com this past week named Lippy’s the top BBQ restaurant in Nebraska for their “naked BBQ” in the site’s “Best Barbecue Joints in all 50 States” article. See Lippy’s BBQ on Facebook or at lippysbbq.com for details and directions. If you’re going for the Blues Fest, bring your lawn chairs. Lippy’s is located at 125 W. 2nd Street in Malcolm, NE.

Hector Anchondo Band has a free show at Aksarben Village’s Stinson Park, 7 p.m. with special guests, K.C.’s Coyote Bill Band. Anchondo is having a busy year after making it all the way to the International Blues Challenge Finals (that’s getting from 250 participating international bands down to the final eight, a huge accomplishment on the national blues scene).  See hectoranchondo.com.

Harmonica virtuoso and bad-ass Jason Ricci returns to The 21st Saloon Saturday, May 28, 8-11 for what is sure to be a knock-out gig.

Don’t forget the great Buckwheat Zydeco is coming up at Lincoln’s Bourbon Theatre Friday, June 3. See bourbontheatre.com. Also on the horizon at the Bourbon are Ziggy Marley June 11 and Reverend Horton Heat June 26, plus that charismatic Cajun Tab Benoit scheduled for a gig July 13.

Lincoln’s Zoo Bar gets in on James Harman’s birthday week, hosting a late-announced show with Harman on Sunday, June 5, 5 p.m. It sounds like Harman’s great California guitarist, Nathan James, will be on the road with Harman, an added reason to catch this show. Harman is a part of the close-knit Zoo Bar family and this is sure to be a packed gig and a great night. James Harman has his official 70th Birthday celebration June 8 at Fitzgerald’s in Chicago, another great American roots club, while that city will be dripping with blues during the annual Chicago Blues Fest. (Harman is not playing the festival itself, but you can catch Curtis Salgado among others if you are heading to the WIndy City for their annual Blues Fest. See chicagobluesfestival.us) For more on lifelong bluesman Harman, see jamesharman.com. Harman has a new 2015 disc, Bonetime, out on Electro-Fi Records.

The 21st Saloon is presenting more music than ever. Starting Wednesday, June 1, 7-10 p.m., The 21st begins Plugged In: Omaha Musicians Showcase a weekly Wednesday night jam/musicians’ showcase. The concept, according to the Facebook launch page, “will encompass a variety of different sides of the music scene. We want to make this a home for local artists to gather, support, grow, and simply just enjoy what we have dedicated so much of our time and life doing. Not only do we want to have an outlet for musicians but also want to include the technical minds behind the soundboard, light board, and the “gear heads.” The June 1 kick-off show will be Matt Gagne & The Blues Experience with special guests including BluesEd youth performers.

The 21st will also be presenting selected rock shows on Fridays, 9 p.m.

Mike Zito & The Wheel have been added to the Zoo Bar calendar with a show Tuesday, June 14, 6-9 p.m.

Honky-tonk outlaw Americana hero Dale Watson has a gig at Omaha’s Reverb Lounge Monday, June 13, 8 p.m. His website also lists a gig at Lincoln’s Zoo Bar Sunday, June 12, 7:30 p.m. But as of tonight, May 27, I don’t see that on the Zoo’s calendar. Watson does play the Zoo as part of the 43rd Anniversary party ZooFest July 8 and 9. See zoobar.com.

Andy Frasco plays at Sokol Park June 9, in support of his new CD Happy Bastards. If you’ve never seen Frasco, who’s performed locally, nationally and internationally with Kris Lager Band helping back him and his key players up, he puts together a raw, high-energy, entertaining show that appeals to the 20-something crowd while featuring traditional blues and R&B along with original tunes. See andyfrasco.com.

Keep up with all the fun summer concerts and events being planned for Sokol Park by former KLB bassist Brandon Miller at facebook.com/HullabalooMusic

Don’t forget the soulful, soaring vocals and powerful music of Curtis Salgado are featured at The 21st Saloon Tuesday, June 7, and he and his always impeccable band gig at The Zoo Bar Wednesday, June 8, both shows 6-9 p.m. He’s got a wonderful new disc, The Beautiful Lowdown on Alligator. Check it out and don’t miss Salgado’s first Nebraska performances in two years.