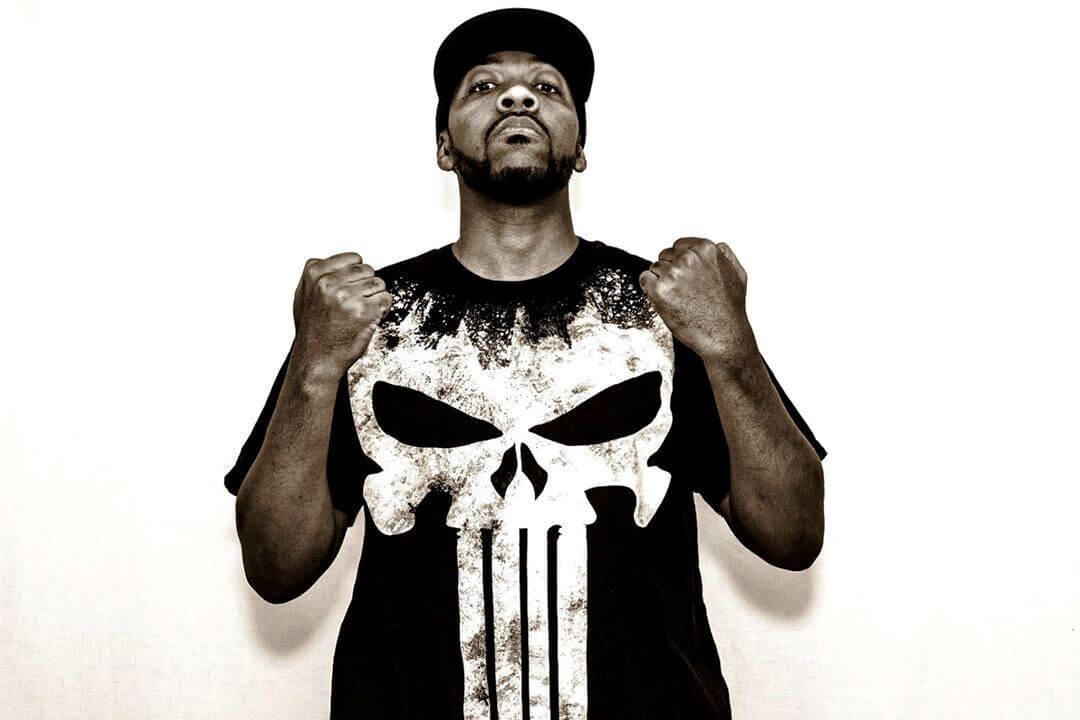 Sitting at a table in Aromas in his Benson neighborhood, drinking a white chocolate mocha, Gene Poindexter, aka TKO, is more soft-spoken and humbler than his songs and onstage persona would have you believe. Sitting across the table from me wearing a backwards Nebraska hat and a Pepsi t-shirt, he talks about his family, his work and his music.

He said his onstage moniker is derived from the boxing term, technical knockout, but has also been said to mean “True King of Omaha.”

“I don’t really like to use that too much,” he said. “That kind of sounds arrogant.”

While he may not want to sound overly confident, the 34-year-old husband and father of three certainly has every reason to be.

Though he didn’t come on to the Omaha hip-hop scene until 2013, he came out swinging, putting out two albums, “TKOmaha” and “GENEius,” and a mixtape, “God King,” in just over a year.

While he’s been writing his own raps since he was 15 and recording them since he was 24, he was basically just doing it for himself. He said he has over 1,000 songs in his arsenal.

“I just didn’t do anything with them, I didn’t know there was a hip-hop scene,” he said.

TKO said his friend, fellow performer Danell Taylor, started pressuring him to put himself out there a few years ago. The two met while working together at TD Ameritrade and Taylor now runs Small Guy Promotions.

Though he could have started performing a long time ago, TKO said he’s happy with where he’s at.

“I think it was really good timing, because my music had gotten to the point where I was so comfortable with it that it wasn’t like starting out as an amateur.”

TKO said Michael Pointer, aka Saint Mic, another local rapper known for battling, was a pretty big influencer in his decision to start performing. He said he saw one of his battles on YouTube and reached out to him.

“I reached out to him, and he invited me to a show,” he said. “Ever since then, I’ve been to every single show I could go to.”

Seeing one of TKO’s shows, most people probably wouldn’t realize he’s only been performing for a couple years. He seems confident and comfortable in his own skin while onstage, talking to the audience and sometimes cracking jokes.

His performance at the Slowdown for The Screamer’s Ball was short, but it made an impact. Even though most of the crowd wasn’t really there for a rap show, by the third song, a look around the room confirmed that the crowd was feeling it.

“I really like this,” said a friend of mine, in a voice laced with surprise.

TKO said he’s worked really hard to make music he considers good and he’s working hard for the music scene here in Omaha. Despite the recent shooting at Slowdown, just a couple weeks after his performance at the ball, he said there’s never been an incident like that at one of his more than 50 shows.

“There’s a lot of good music out here. I’d like these shows to really become something,” he said. “There’s a lot of people, family guys, guys that work hard and love what they do that are putting out really positive shows.”

“Just come to one show,” he said. “I guarantee you’ll want to come back.”

*TKO has an upcoming show at The Waiting Room on Thursday, Dec. 17th and his new album, “The Punisher,” is now available online at https://bluboimuusic.bandcamp.com/album/punisher