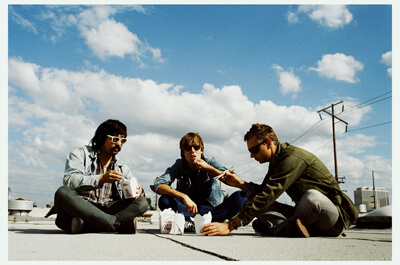 The seeds for collaboration between Man Man’s Ryan Kattner and Islands’ Nick Thorburn were planted in 2006.

They just took five years to sprout into Mister Heavenly, a trio rounded out by drummer Joe Plummer of Modest Mouse.

Kattner, who performs as Honus Honus, says he wanted to see how his voice, a low, rough and husky carnival barker’s call, would pair with the higher-register voice of Thorburn.

“I always thought our voices would provide an interesting contrast,” Kattner says.

After years of talk about a collaboration, time opened up for both artists as Kattner was between the writing and recording processes for the most recent Man Man album, Life Fantastic, which came out earlier this year.

The two had been bouncing song ideas back and forth via email and decided to set up shop in a Brooklyn basement to record demo tracks.

At this point, Plummer came into the picture. Kattner and Plummer had formed a fast friendship after Man Man opened several shows for Modest Mouse in 2007.

He says the two had kicked around being in a band together, but hadn’t seriously pursued anything. As it turned out, Plummer wanted to participate in the demo sessions for the songs Kattner and Thorburn had been cooking up.

The three worked on songs for two days. On the third day, they set up two microphones and recorded 10 songs.

Plummer, who also is in the Shins, slapped four of the songs onto a cassette and dropped it in the mail. Destination: Sub-Pop Records headquarters in Seattle.

The sequence of events was very fortuitous, Kattner says.

“We didn’t have any expectations at all,” he says

Kattner says the initial plan was to record a couple songs for a 7-inch single, minimizing the commitment of all parties in case things didn’t mesh well.

Now the demo sessions had yielded a full crop of songs and a recording deal with Sub-Pop.

“This is the story of false hope you tell kids that are starting a band,” Kattner jokes.

After recording the Mister Heavenly demos, Kattner came to Omaha, where Man Man recorded Life Fantastic. Kattner was in Omaha for about three months while the band worked with Mike Mogis. He says he would like to return to Mogis’ ARC Studios the next time Man Man record.

Once the lengthy sessions for Man Man concluded, Kattner jumped right into proceedings for the Mister Heavenly record.

The trio decided to apply the sense of immediacy that spawned their initial demo recordings to sessions for the full-length, Out of Love, which came out in mid-August. The band spent two weeks at Bear Creek Studio in Washington, banging out 12 songs straight to tape.

Mister Heavenly is only the second band Kattner has been in and he’s never really collaborated with another songwriter. The partnership was especially beneficial during the times Kattner would hit a wall while working on a song.

“I could pass that song along to someone else,” he says.

“It was fun to explore writing with someone like Nick.”

Kattner says Mister Heavenly’s style jumps around a bit, though it is underpinned by a doo-wop sound derived from the interplay between the two singers’ voices. The band has taken to calling their heavier, darker riff on doo-wop “doom-wop”.

On record, Mister Heavenly is a moodier, groovier cousin to the chaotic gypsy punk-inflected sound of Man Man.

Kattner says he thinks Out of Love sounds vastly different than the latest Man Man record.

“If people have no expectations, they can be pleasantly surprised,” he says.

The stark differences between the two bands carry over to Kattner’s stage presence in Mister Heavenly. During Man Man shows, Kattner prowls the stage in white cut-off shorts, while singing all the songs. Mister Heavenly lets Kattner dial down the tempo and hand off a good portion of the singing to Thorburn.

Kattner says he appreciates the calmer nature of the band. He says he doesn’t even leave his spot in front of the keyboard.