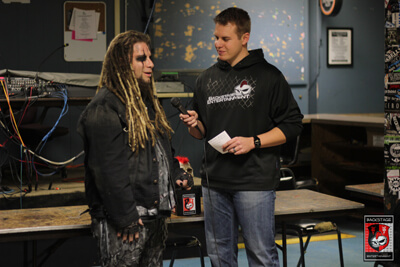 The Hell Pop Tour featuring In This Moment, Motionless in White, Kyng, and All Hail The Yeti came through Omaha on Wednesday, November 20th. The tour has been going great from what many of the band members have said as we got the chance to interview some that night. They had been playing every night for about two weeks straight at the time. One of the best things many said on this tour is that everyone gets along really well and they’re all friends. Watching the bands onstage and off, you could tell that held to be true.

During the night, Backstage Entertainment got a chance to interview three of the bands to talk about the tour, answer fan submitted questions in the “BSE Box,” and more. First, we talked to Eddie and Pepe from Kyng, they discussed the advantages to having other bands’ fans on tour see them for the first time, how they got on the tour, and Eddie even thumb wrestled our camera girl during one of his “BSE Box” questions.

Next, Chris from In This Moment, talked about remember our first interview with him and Maria from almost three years ago, why the band decided to take on a more edgy look with their new album “Blood,” and how he feels about a couple of the old band members leaving to be part of James Durbin’s band. The last interview of the night was with All Hail The Yeti. After their set we talked with a few of the guys about how touring takes a physical toll on your body, how the last year has been very busy for the band, and then had some fun with the actions during the fan submitted questions.

Make sure to check out the links below to watch the interviews and see the photos from the night.

In This Moment Interview

All Hail The Yeti Interview