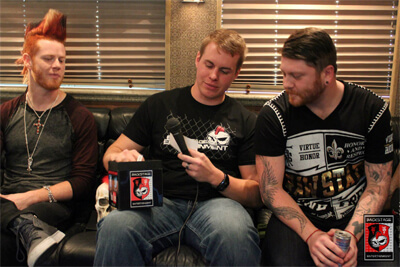 Sunday, October 27th was the last night of the tour with Hinder, Candlebox, Devour The Day, and Open Air Stereo. All the bands finished the tour strong with a little pranking throughout the night as well. The last time Hinder was in town it was back in February during one of snowstorms we had. Many fans came out to support the band and this night was no different. The Whiskey Roadhouse inside the Horseshoe Casino in Council Bluffs was full of people wall to wall.

Before the show, Backstage Entertainment spoke to three of the four bands in an interview. First, we spoke with the guys in Open Air Stereo. Their debut album, “Primates,” is out now and the guys couldn’t be more stoked. They had a lot of fun during the interview especially during the “BSE Box” portion of it. After them, we spoke with Cody from Hinder and halfway through the interview Jared Weeks, the fill in singer for Austin Winkler, joined us. Jared is the current lead singer for Saving Abel and has been filling in for Austin who was not joining the band during this tour.

After our 5th interview with Hinder we went to the guys in Devour The Day. Blake and Joey formed the band after they were in Egypt Central and have their debut album, “Time & Pressure” featuring their hit “Good Man,” out now. Their interview was a lot of fun too and had the Hinder guys watching on the side.

During the night, Backstage Entertainment also captured some live photos from the show. Be sure to check the links below and watch the interviews.