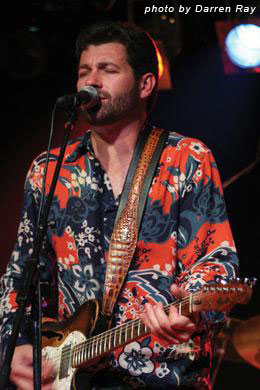 Here’s a quick weekend update, and I apologize in advance for whatever I forget.

Saturday Hector Anchondo and E3 Music Management host a celebration of live blues in the Old Market, which used to be one of the go-to places in town for great blues and roots music. The first annual In The Market for Blues festival happens Saturday, Sept. 19, featuring local and regional blues acts. Music takes place at the Harney Street Tavern and The Hive, both of which are located in the Old Market on Harney Street between 11th & 12th Streets. $5 gets you a wristband for admission to both venues for the entire event. See Facebook.com/InTheMarketForBlues

Also happening Saturday, The 21st Saloon presents California blues-rock guitarist Dennis Jones. Showtime has been pushed back to 7 p.m. for this show. Jones was part of Zac Harmon’s band when they won the 2004 International Blues Challenge. Keeping the Blues Alive Award winner for Journalism Dave Rubin says of Jones, “It’s risky to make predictions, but if anyone has a legitimate shot at filling the blues guitar hero void it is Dennis Jones. He has the head, heart and hands to do it.” See dennisjonescentral.com.

Sunday, Sept. 20, the Blues Society of Omaha hosts Round Two of the Nebraska Blues Challenge at The 21st Saloon. Here are the performing bands and times:

The band receiving the most points will join first preliminary round winner The Rex Granite Band featuring Sarah Benck in the finals Sunday, Oct. 4. The finals will decide who will represent the Blues Society of Omaha in the 2016 International Blues Challenge in Memphis at the end of January 2016. See blues.org.

All performances are at The 21st Saloon, 96th & L. There is a $5 cover charge that goes toward the cost of the events. The remaining preliminary round and participating bands are:

Sunday, Sept. 20, in Lincoln, Minnesota’s Charlie Parr plays Vega. Also performing are Jack Hotel and Mike Semrad, Jr. Showtime is 8 p.m. Parr is a veteran blues-folk guitarist whose influences range from Charley Patton, Lightnin’ Hopkins, Woody Guthrie and Leadbelly to Captain Beefheart. In one of the more unusual PR notes I’ve seen in a while, his press materials also note that “these days he tours alone, cooking his meals on his engine manifold and often sleeping in his car: while reassuring the reader “(he’s got a wife and kids back in Duluth).” Parr’s spring 2015 release, Stumpjumper (Red House Records), was named one of the best roots/folk albums of the summer by Rhapsody. His recent NPR Folk Alley session was just selected as an NPR Favorite Session.

One critic raves “Charlie’s raw acoustic folk blues and blistering picking have brought him a cult following — his vivid narratives and hard luck protagonists reflect his working-class upbringing in rural Minnesota and his no-BS take on life.”

The Alvin brothers’ latest disc, Lost Time (Yep Roc), hit stores Friday, Sept. 18. The disc is a rockin’ affair that pays tribute to more of Dave and Phil Alvin’s mentors and inspirations, including the great Big Joe Turner who was not only a hero to the young Alvins but became a close friend of the family. Other artists who get the Alvin brothers testifying, rockin’ testimonial include James Brown, Leadbelly, Willie Dixon, Blind Boy Fuller and Leroy Carr. Find out more at davealvin.net and yeproc.11spot.com/music/artists/dave-alvin/dave-alvin-phil-alvin-lost-time-pre-order-9-18.html.