Home » Music » Howling at the Moon with MiWi La Lupa 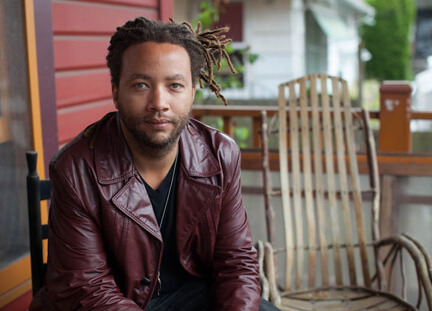 MiWi La Lupa is already an established musician with a bio to die for. The Buffalo, N.Y., native picked up the trombone at a young age and soon began dreaming of a career in music. That passion led him to Rochester, N.Y., and the Eastman School of Music, where he graduated instrumentaly to the bass trumpet. In 2005, he moved to NYC and his career shifted into high gear as he became the bass trumpet player for the band Red Barrat. A world tour with the band soon followed and that notoriety brought him the opportunity to perform with such artists as Les McCann, David Byrne and Bill Frisell, to name a few.

La Lupa is now stepping out on his own as a solo singer-songwriter on his upcoming Team Love Records  album New Way Home, which dropped last week. The record is short but so sweet with songs that paint an emotional and diverse melodic canvass. He flexes his blues muscles with “Ashes to the Wind,” offers some major pop attitude with “Everybody’s Fuckin’ with Me” and tugs at the heart strings with “New Moon Night.” New Way Home features a variety of guest players, including Bill Frisell and label-founder Conor Oberst. La Lupa brings his unique talents to Omaha Friday, Jan. 31, performing at the legendary O’leaver’s Pub. Expect to hear a lot more from this skillful and versatile artist in the future. La Lupa discussed his future and dished about his amazing new album, his various influences and his unique activism in this exclusive interview:

What made you decide to step out on your own as a singer-songwriter?

It was Dall of 2011 shortly after my life changed dramatically that I met with my dear “swisster” Monica Frisell and told the songs I’d written. She said she wanted to help me make a record. The songs were different than the a lot of the songs I’d written for my bands Thought and Knights on Earth at that point. I guess it was time.

Your music is very folk and rock based. Has that always been the sound you aimed for or has it evolved along the way?

I’ve always been a fan of rock music, though I grew up in a Mowtown/hip-hop/R&B house. It’s all rock’n’roll! The folk inspiration for this group of songs came in part the day after my surgery when my friend Evan Howard put a copy of Willie Nelson’s “Red Headed Stranger” in my hands, followed by my friend Mike Ross putting a copy of Jakob Dylan’s “Women and Country” in my hands. I devoured these records. However I used to write in a similar style in the early days of my eclectic band Thought back in our early days in Buffalo, NY… then, more in our first years in Brooklyn. I guess Gillian Welch has a huge influence on my music still, too. And my father’s from Birmingham, Alabama… so, they play folk music down there, right?

You must feel very accomplished with all the artists you’ve worked with and the impression you’ve already made but to now stand alone. How does it feel and is it what you expected?

I’m humbled, to be honest. Some of my favorite artists had to make this choice at some point in their careers — to be a hired gun, or set a new path and make a name for yourself. Or, perhaps, they didn’t have to make that choice. Who knows? I feel fortunate to have worked with the artists I have worked with, and look forward to future opportunities. But it’s a big difference being a hired gun vs. the unique voice/sound people want on their records. A lot of my friends can play what I’ve played on some of the records I’ve played on. But, I know that a lot of my friends in this industry are constantly waiting to get the call for the need of their specific skill. Right place. Right time. And a bunch of grinding. Anyways, it feels like a great deal of responsibility that I’m happy to accept thanks to the encouragement both spoken or otherwise passed on in commitment to making music. I especially feel thankful to my band whose sacrifice and commitment to making this music, both on the record and in live situations, make me want to cry and give thanks.

They call you MiWi La Lupa”The Wolf” and you are an advocate for conserving wolves. Where did that passion come from?

Thank You, Jack London. Thank you, Wolf Conservation Center in South Salem, NY. And Thank you, to the late Richard Salter. I read Jack’s books at an early age, fell in love with wolves and survivors. And I’ve met other wolves, young and old, like myself. How could anyone kill such an animal as awesome the wolf, other than for actual survival. They are mistreated, outlawed and stereotyped in the worst ways. I tend to side with humans, and animals like this.

You play the bass, trumpet and trombone. Do you play any other instruments and did you do any of the instrumentals on the album?

I play bass trumpet, acoustic guitar, electric guitar and some drums/percussion (but, don’t tell anyone) on the record. I’ve been known to play keyboard with some folks, too.

What instrument is your favorite to play and why?

Besides singing, I really love playing electric bass. Why? “Ya got the whole world in your hands.” And if you don’t have to sing, you get to zone out and lay the foundation to the whole song the entire night. There’s a lot of pressure with this role. Thank you Meshelle Ndgeocello and Tina Weymouth and Jesske Hume (to name, well… a few of my favorite gals) for showing me what’s up.

What is the most important thing to you that  the audience takes away from this album?

I really just hope that the music touches your heart in some way. And, that it makes you appreciate the love you currently have in your life a little bit more.

Your lyrics really paint a picture and flow so beautifully. How long have you been writing music and how do you approach your writing?

I’ve been singing and writing songs since ’98 with my band Thought. How do I approach my writing? Sometimes, I wake up with a melody in my head, or a lyrical phrase starts floating around up there. Really, it just takes that one spark to get a song going. It’s almost as if it’s a fill in the blank question that you ask yourself. Sometimes, you have to fix the words along with a melody, or vice-a-versa. Other times, it’s an actual story you have to make into a song. Otherwise, it’s just poetry. Instrumentation comes from imagination and what’s available (your sweet, sweet, willing, talented friends).

When you write music is it always about your own personal experiences or other people’s as well?

Good question. Most times it’s my personal experience in my relationships with others. I generally tell “our story.” It’s rare that it’s another’s singular experience. Though we can probably all relate. However, I’m always searching for stories from someone other than myself that need to be told.

I absolutely love the song “Ashes to the Wind.” What inspired that song?

That’s a true story. I’m glad you like it. Thanks again to St. Dymphna’s and all the other bars that I called “home” during my transformation period.

As a songwriter I assume every song has a personal place to you, but is there any one song that means more to you?

New Moon Night is actually the only tale on the record. I have no idea where the idea came from and was shocked that the story unfolded before me, and that I had the chutzpah to tell it. A little distanced from the creation of the song now, I feel as though this style of writing (“Tales”) has opened some doors for me, and, perhaps, may lead me onto less vulnerable storytelling/songwriting paths. I feel bad for the woman in that tale, though I don’t know her.

What were your biggest goals and dreams for your solo album?

Simply to get the stories off of my chest, and make the best record I could with what I had around me (Thank God for my extremely talented, encouraging friends). It seems that the writing/recording process is a dream now. Like, “Wow, that happened?!” The best advice I’ve been given has come from some of my heroes. That is advice that I give to anyone on the brink of giving up anything they care about, or stuck on what to do next: “Keep Going.” I guess that is my goal, and is my dream.