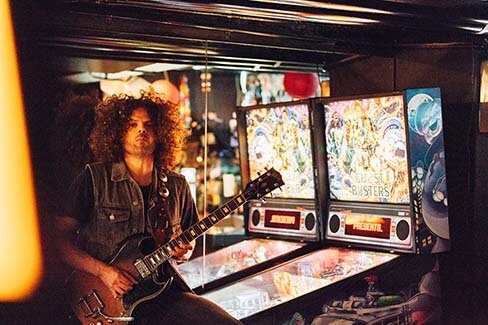 When I call Wolfmother’s lead singer and guitarist Andrew Stockdale, the first thing I’m struck by is the sound of the ocean. It’s only 8 a.m. in Australia, where he’s calling from his beachside home, but Stockdale sounds totally awake, chipper even, and is constantly laughing and joking as the waves gently lap against the shore. This is his last day at home before he heads to the U.S. for a week-long tour across the country and he’s trying to get in as much family time as possible before he ships out. It’s a balancing act having to jockey between being an axe-wielding rock star and stay-at-home dad, but fourteen years into his career Stockdale feels like he finally has control of the situation — something he has always longed for — and is able to enjoy the ride now more than ever.

Stockdale started Wolfmother with Myles Heskett and Chris Ross in 2000 but the band didn’t start playing live until 2004. From there, it all happened fast. The band signed to Modular records during the summer of that year, put out an EP the next month, and released their self-titled debut album in Australia on Halloween in 2005. Their rise over the next year was staggering — Wolfmother went platinum five times over in the band’s home country and gold in the U.S. and U.K. Their songs appeared in everything from Guitar Hero to 500 Days of Summer, and they were playing every major festival across the globe.

After the colossal success of the first record, the band came back down to earth. Rumors of infighting started to swirl and Heskett and Ross left the band in 2008. Stockdale retooled the band on the fly and Cosmic Egg was released the following year to lukewarm reviews. Since then the band released two more albums, along with a solo effort from Stockdale in 2013, while continuing with a fairly robust tour schedule that has included stints opening for Guns N’ Roses and the original Aussie hard rockers, AC/DC.

For Monday night’s show at the Waiting Room, Wolfmother may be listed as the headlining band, but this is really the Andrew Stockdale show – then again, it always has been. Stockdale is credited as being the sole songwriter on the majority of Wolfmother’s original material. Even those where he’s not, he still did most of the heavy lifting.

“I would write the intro riff and the chorus for something like ‘Joker and the Thief’ or ‘Woman’ or ‘White Unicorn…’ and we would spend a month in pre-production working them out,” Stockdale tells me. Early on, Stockdale believed these jam sessions were key. Even after Ross and Heskett departed, Stockdale still tried to incorporate his band of mercenary musicians into the writing process.

“Because I was conditioned to working out with the band, I thought that was the way to make a good record,” he says. “In hindsight, I think my demos kind of lost something. There was a certain charm when I played everything that gets lost with getting different people to play the parts.”

For his new solo record Slipstream, Stockdale wanted everyone to know who was pulling the strings.

“I just felt like coming out from behind the curtain,” he says, also noting that the process of recording Slipstream has allowed him to branch out musically.

“When you’re in LA and you’re in a big Hollywood studio you fancy yourself as some kind of prolific writer,” says Stockdale laughing at the pomp of the situation. “It’s a different approach where you can be like ‘I want cello on the outro’ or ‘I want grand piano on this bit.’ That’s the beauty of doing a solo record is that you can really go off the handle.”

Even when he hired studio musicians to bring his arrangements to life, it was a bit hard for Stockdale to let go of the reins. “You bring people into the studio and they’re like ‘oh, so you kinda want my vibe and my take on this’ and I’m like ‘no I want you to do exactly what I want,’ but then when you say that it’s like a terrible vibe,” he says, laughing again. ” It depends on the person but when I bring them in it’s like ‘oh shit I got to let them try what they want!'”

Recording in this fashion can be dangerous — it brings to mind the image of Dewey Cox screaming “I want an army of didgeridoos!” Stockdale believes that he has managed to avoid going full Brian Wilson.

“I’ve always been very cautious of being indulgent cause I thought what I was making could turn into some long-winded piece of crap,” Stockdale tells me. “I think I’ve managed to avoid that by keeping good arrangements and tightening it up a bit.”

And with that, he’s off. He tells me that he has to drop his daughter off at school and square a few things away before he leaves. Wolf father jokes aside, Stockdale seems incredibly at ease with his situation. He tours when he wants, records how he wants, and gets to spend more time with his family than ever. For someone who likes to have as much control as Stockdale, he couldn’t find himself in a better position.