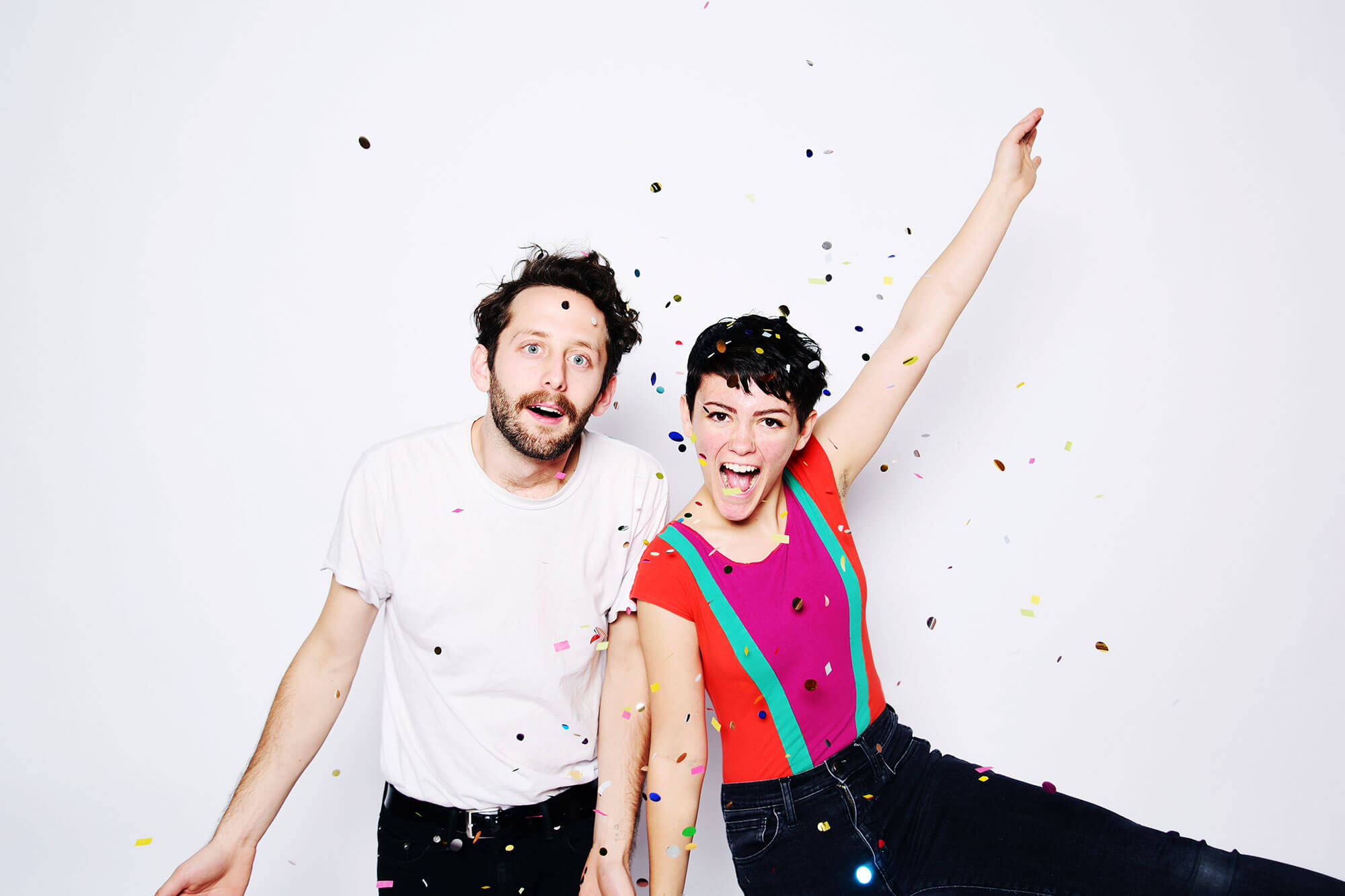 “I can talk louder if you can’t hear me over the van,” says Alex Luciano, the singer and guitarist of Diet Cig. The band, comprised of Luciano and drummer Noah Bowman, are on the fourth day of a cross-country tour and are headed to Chicago for a gig, after which they will play back-to-back shows at the University of Wisconsin and the University of Minnesota before making their down to Omaha.

“Each college kind of does it in its own way,” Luciano tells me. “It’s cool to see that it’s run by students that are really passionate and sort of figuring it out as they go along.” The same could be said for the band members themselves.

The pair met when Luciano asked Bowman for a lighter while he was on stage performing with his band Earl Boykins (named after the pint-sized NBA legend). The two instantly hit it off and were making music together within months. After settling on the name Diet Cig for no other reason than it looked good on a poster, they released their debut EP, 2015’s Over Easy. With its mix of lo-fi, pop-punk melodies and angsty, instantly relatable lyrics, the EP garnered positive reviews across the blogosphere. The band made good on the promise Over Easy showed when they released their full-length debut album, Swear I’m Good At This, in April of last year.

It’s fitting I’m talking to them on the road since the band has been touring almost non-stop since the release of Over Easy. Bowman and Luciano have played all manner of theaters, dives, clubs, festivals, and showcases over the last few years. In fact, the band’s Feb. 6 show at Reverb will be their third in Omaha in roughly the last year-and-a-half. “We played a festival here a couple summers ago (referring to Maha 2016) which was awesome and it seemed like the people planning it really cared,” Luciano tells me. “Coming to a place like this, you just get that Midwestern sense of friendliness that you don’t always find when you’re on the coasts.”

Unlike those earlier shows, Luciano and Bowman will not be playing alone. For this tour, they decided to bring along a pair of extra musicians to play bass and synthesizers. “It brings the songs more life, gives them that push,” says Luciano. “Plus I really like being able to learn the songs again in a new way.”

I ask if playing with new band members means Luciano will be playing a different guitar to her preferred Gibson L6S, a rarely-seen model that rose to prominence in the mid-seventies. “It’s actually an Ibanez knock-off version,” Luciano confesses. “I think Ibanez got sued by Gibson and so Ibanez took its name off of the guitar and sold them to department stores who then sold them for like a hundred bucks.” The guitar’s humble beginnings appear to be a point of pride for Luciano. “I loved playing it while recording and our engineer found the exact same model on Craiglist which was wild,” she recalls. “I love cheap, shitty guitars and the fact that I could get the sound I wanted without spending a lot of money was a really cool revelation to have.”

When asked if the crowd can expect any new material, Luciano says that they do not have anything completely finished. “We’re playing bits of certain new songs and we have a really cheesy cover thrown in at the end but that’s about it,” she says. “After the tour, I’m looking forward to getting back in the writing space because Noah and I both have some things we want to try.”

For the moment though Luciano tells me she is psyched to get out and perform. On that note, I ask her about comments she made about wanting to see more women at shows. “I think that was mostly just referring to where we were starting out at,” she says, referring the State University of New York (SUNY for short) scene where the band got its start. “Our fan base is young girls and older white guys and everyone in between, and I always find it interesting to see everyone that shows up,” she tells me, adding that she is thankful for the support from wherever it comes from.

While Luciano may be excited to see girls rocking out at the show, she detests any mention of her gender in reviews. “I don’t like being classified as female-fronted,” she grumbles. “Gendering a band as its genre is a little irritating and it doesn’t give you any idea of what the music is like.” When I ask her what the band would like to be classified as she laughs and says that she and Bowman jokingly refer to their sound as “thot pop.”

To end the interview, I asked Luciano to tell me a topic she wished more reporters would ask about. She picks astrology, which she believes is a good signifier as to why she and Bowman work so well together. “Noah is Capricorn, he’s the one that’s grounded and really knows how to get stuff done,” she explains. “And I’m a Leo so I’m all energy and all over the place.” It could not be any more cheesy, but it seems likes success for Diet Cig was always written in the stars.

Advanced tickets for the show are available for $13 on Etix or $15 day of the show.