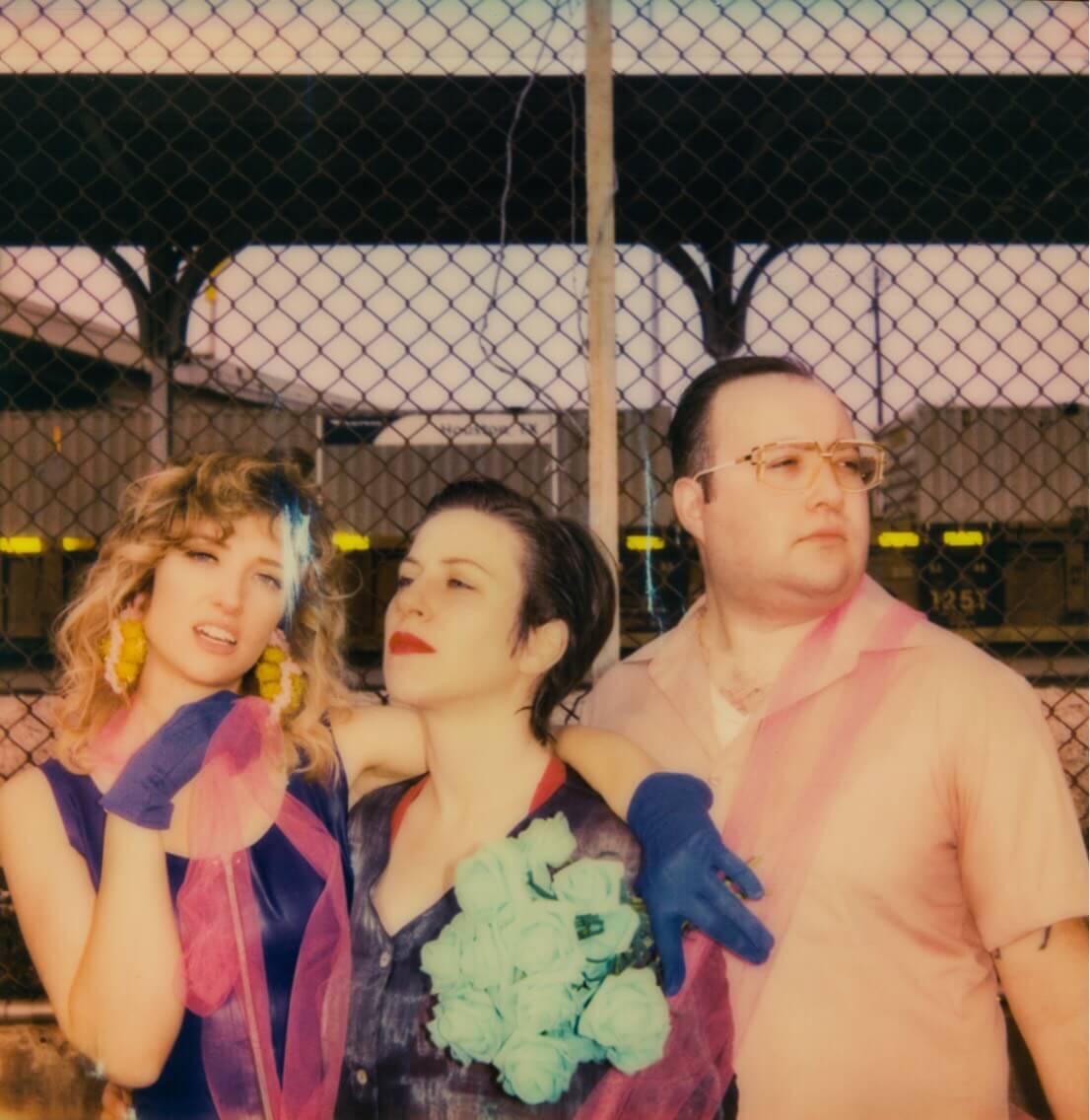 When I call Priests’ lead singer Katie Alice Greer she tells me that she is on the way to her local craft store to pick up some “puff balls.” She plans to sew these decorative spheres of cotton onto one of the dresses that she is taking on tour. While this initially struck me as a quaint, funny detail, looking back I find that nothing does a better job of exemplifying the Priests ethos.

Priests are the epitome of a DIY band. They took an extensive amount of time to write and record their stellar debut (last year’s Nothing Feels Natural), they put it out on their own label (Sister Polygon Records), and they keep close track of all their finances so that shifty promoters are not able to undercut them when negotiating a booking fee. They even spurned using a lawyer when setting up the LLC for their record label. In a world where DIY can be used to describe any band that doesn’t know how to play their instruments or properly record their music, Priests are a reminder of what the moniker can stand for. The “puff balls” are an extension of this. It is not enough for them to take charge of their music and finances, they have to have precise control over their appearance as well.

When I mention all this to Greer she is quick to point out that the band members are not the only ones that deserve credit for making Priests happen. “I always try to emphasize to people that we’re not bragging about doing this ourselves,” she tells me. “It’s built within a community of like-minded people that we collaborate with.” Specifically, she says the band now have a booking manager and press team to assist them. “It always weirds me out when people who come from independent music brag a little bit too much about having done it themselves because they probably didn’t and they’re just ignoring the labor someone went through to help them out.”

At this point, Priests need all the help they can get. The Washington D.C.-based band, featuring drummer Daniele Daniele, guitarist G.L. Jaguar and a rotating cast of bass players (original bassist Taylor Mulitz left amicably to start his own band earlier this year), have been touring tirelessly over the last year after gaining notoriety for Nothing Feels Natural. While Greer is certainly excited by the level of buzz surrounding the band, she is also looking forward to having a break. Before that can happen though, the band have a tour booked through June which includes dates opening for Franz Ferdinand. That same tour also took them to the desert to play Coachella for the first time.

“We’ve really gone out of our way in the six years we’ve been a band to play all different kinds of shows,” Greer tells me. “We’ve played in a high school auditorium in Missouri, we’ve played in a movie theater in Times Square, we’ve played in a tattoo parlor in Pittsburgh so being on the festival circuit for the last year is just another strange setting for a show.” For Greer, the venue is secondary, what matters is that people are having a good time.

Playing those festival sets also provides a lucrative paycheck that can be hard to come by. Greer tells me that, surprisingly, there is not a whole lot of money in being a musically omnivorous band with punk rock leanings. However, for her and the rest of the members, that has never been the main concern.

“I get to consider my job making music and that is really, really exciting to me,” she says. “Now are there days when I only have $20 in my bank account, yes, absolutely. When you work in a creative field you really have to love what you do and expect to make no money.”

One way you can help to rectify that situation is to pick up a copy of Nothing Feels Natural. The record was almost universally acclaimed and listed as one of the best debuts of the year. While the band was lavished with praise, there were still plenty of writers that chose to lazily describe the group as “politically-charged” and “female-fronted.” I ask Greer if she finds these signifiers to be as ridiculous as I do and she immediately agreed.

“Thank you for saying that so I don’t have to explain it for the umpteenth time,” she says with a sigh of relief. “I’m not really into genre signifiers and they aren’t something I think about when trying to make music. I get it that people are looking for an angle and it helps them to compartmentalize the band, so I don’t hold it against them. A lot of the time they’re just trying to write a story and they just aren’t given the time or the resources to do so properly.”

While Greer does not seem particularly interested in slapping labels on her music, she seems to enjoy discussing how people decide what those labels are. In an interview with Under the Radar, Greer discussed how she was obsessed with listening to and figuring out how to make “bad music.” When I mention this she is quick to clarify. “I don’t want to make music that people dislike per se, but I was kind of curious about the constructs of what makes music ‘good’ and what makes it ‘bad,'” she tells me. “When you study those things you can really see how malleable those ideas are.”

I ask Greer how she feels about a theory I recently read in Chuck Klosterman’s I Wear The Black Hat that says we stop caring about those signifiers altogether once we reach a certain age. “I don’t think that’s true,” she says. “I think just going back to critical thinking, or I guess critical listening, but I think it just means we need to put that much more time into hearing new things and looking for music that’s going to astound us,” she continues. “I hope I still hate shit when I’m in my mid-30s and 40s,” she adds with a laugh.

While I enjoy hating certain music as much as the next person, there is not a lot to dislike about Nothing Feels Natural. As much as Greer hates genre signifiers, I would be remiss if I did not rattle off a few. This album has everything: knotty new-wave (“Puff” and “Suck’), sinister surf rock (“Jj”), Sonic Youth-inspired spoken word (“No Big Bang”), and even an orchestral interlude (the aptly-titled “Interlude”). The album’s opener, “Appropriate,” has a distinct free-jazz influence reminiscent of Funhouse-era Stooges, a band that Greer holds close to her heart. She tells me that Iggy Pop, the legendary frontman of the Stooges, recently played one of Priests’ songs on his radio program. “I was listening to the stream and just kept rewinding to hear him say ‘Priests, good band.'”

Part of what makes the album so engaging is Greer’s vocal delivery. Not only does she switch between throaty howls, pained croons, and an icy deadpan, but she delivers them all with her own idiosyncratic phrasing. There are multiple times throughout the record where Greer holds a note for shorter or longer than I expected. At other points, her words run together in a way that sounds like she won’t be able to finish her thought before the verse ends.

“A lot of times it’s hard for me to even wrap my head around the structure of the song or the melody and so I just have words that I’m really certain about,” says Greer. “I don’t want it to be like I’m taking out different flashcards of traditional song structures and saying ‘okay, gotta write verse three, gotta be four lines,’ that’s boring. I like it when things don’t quite match up.”

Greer tells me that she wants every line she is singing to mean something. She takes the process of crafting songs seriously and wishes that the audiences would bring the same seriousness when listening.

“I just wonder if we’re all subtly encouraged to make fun of art or make light of it or just think of it as inconsequential rather than look at it as something that can communicate radical ideas,” she says. For her, good music inspires conversation, critical thinking, self-analysis, and even personal growth.

“I think failure is something that should be encouraged. That’s how you learn and grow,” she says. “Like if you make something that everybody might not like for the sake of trying something new rather than trying to be contrarian, I think that’s really cool.”

For Greer, and Priests as a whole, making music really is a wholly absorbing lifestyle. They work incredibly hard to painstakingly craft their sound and bring their incendiary live show to fans in every far-flung corner of the country. It’s inspiring stuff and if you have the chance to pick up their record or see them in concert you should absolutely do so. It’s a no-brainer. In fact, it’s the only time you shouldn’t think too hard about Priests or their music.

Priests will be kicking ass at Reverb on May 3. Tickets are available for $10 at Etix.