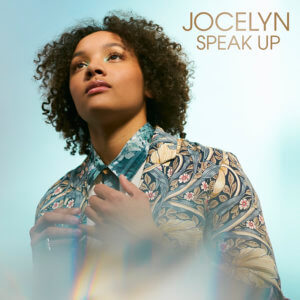 In early 2018 she won over the suits of major record label BMG with an intimate acoustic set in their L.A. offices. Guided by her management, Omaha-based Midlands Music Group, she signed with BMG and joined an artist roster that includes Bruno Mars. Armed with creative control, Jocelyn has worked with producers and session players in L.A. and Nashville studios for her debut feature album releasing this summer.

A tour is in the works.

“I genuinely just want to have a good time making this music,” Jocelyn said, “and that’s really who BMG is.  That’s why we went with them. I could have chosen different record labels, but I didn’t. I went with BMG because the vibe was right.”

She doesn’t worry about losing her authentic self in the grip of a corporate music machine.

“The overall look and sound and feel is all coming from me,” she said, “and the people at the label are all nurturing it and helping me grow into the best version of myself. I’ve always had a say in everything. Always. It’s been a great ride.

“I’m just hanging out with these people and telling them my life story. I’ve always been an open person and it’s really just about connecting. I’ve made a lot of connections and good friends. Everybody’s just pushing each other to do better, giving out suggestions, ideas. That’s really the process.”

The single tracks “Speak Up” and “Never Change” from the album feature Jocelyn in full affirmation mode. The recurring theme in her work is “positivity.”

“I feel like the music I put out helps balance whatever is going on in people’s minds. That’s what I have to do in order to balance out my own mind. Hey, this is how I do therapy to get through my problems. I’m sharing with the rest of the world the love that I have and that I give myself.”

Her material counters “the negativity people want to push on you,” she said.

“Speak Up” is her anti-bullying anthem. “Never Change,” co-written with Nelly Joy Reeves and Eric Arjes, is her plea to “don’t change who you are.” Both come out of her own experiences being bullied and marginalized.

“There’s noise everywhere in how people think of you, how they judge you,” she said. “I’ve had so many people tell me that I’m doing things wrong in their eyes, and I’m like, you have no idea what I’m experiencing.

“There’s all these moments you have to stay positive –

and that’s what the record’s about.”

Her solid chops and loyal fans have earned her Omaha Entertainment and Arts Awards recognition as Best Pop Artist and Artist of the Year. Her charisma carries far beyond these borders. Live or streaming, she captures people everywhere with her energy and sincerity. Even her tattoo that reads Unchain Me (the title of one of her original songs) fits her bohemian free spirit to a T.

In 2016, an online video of Jocelyn performing her song “Just Like Everybody Else” went viral – one of many events giving her a national following.

“It was the first poppy song I’ve ever written. It was one of those breakthrough moments.”

Most importantly, she’s attracted music industry veterans who believe in her potential. Since entering the MMG mentoring program at 16, she’s scored several high-profile opportunities, including a 2017 “Celebrity Undercover Boss” episode at The Speakeasy in Austin, Texas. A disguised Darius Rucker, aka Jackie Middleton, praised her talent. Rucker also pledged his support.

“The show made her look great,” said her MMG manager, Jeff McClain.

Rucker continues serving as a mentor. At his invitation, Jocelyn recently flew to South Carolina to co-write songs with him and his crew for a new project.

“It was really cool,” she said. “It was a little intimidating at first, but you learn to speak your mind. It’s a different process because you’re writing for Darius. It’s a lot of conversations among songwriters.”

She said Rucker is “someone I look up to,” adding, “I aspire to the goals he’s attained.”

In 2017, Jocelyn opened for Rucker at a Stir Cove concert before 5,000 hometown fans. It proved a defining moment. Before her set on that baking-hot day, she left her guitar out in the sun. Onstage, she tried tuning her warped instrument to no avail. She handled the frustration with an aplomb that belied her 19 years.

In the immediate aftermath, though, she felt a failure.

“I pouted on it, I cried about it. But it was a great learning experience. It’s like make sure that shit doesn’t happen again.”

Her manager gave her a different perspective.

“I was watching a star being born on that stage,” McClain said. “Even though it was all going wrong, what she did was amazing at her age. She was in front of a home crowd of 5,000 people and she kept it together. She was professional, she went through with the show. I told her you will never in your entire career be under more pressure than you just were there. If you can handle that, you can handle anything.”

Jocelyn came to appreciate her own resilience.

“I played that show, I kept going, I didn’t stop.”

Her confidence radiated through her 2018 “Showtime at the Apollo” appearance. Not only did she not get booed off stage by that notoriously tough crowd, she got a warm response with her righteous cover of Rihanna, Kanye West and Paul McCartney’s “FourFiveSeconds.”

“I blacked out. No, straight up. The emotions were so intense in my body that I couldn’t feel anything.”

Her poise and command are what Jocelyn champion Ally Peeler saw in her at 15.

“She played for me, and at that moment I was like, this girl’s a star,” said Peeler, an Omaha musician with her own following. “At such a young age she was so composed and expressed such complicated ideas. She knew who she was. That’s what I thought was so beautiful.”

As Jocelyn got more polished, Peeler said, she proved she could “own a room” – quieting even the most boisterous crowd with her musical poetry.

“She captivates an audience. She gets people to listen.”

Those qualities are what sold MMG in 2013.

“She was just absolutely wonderful to watch. She had so much raw talent. It was just obvious. You sensed it,” McClain said.

MMG shows promising young artists the ropes on the condition they do well in school. Only Jocelyn was failing. “Well, we’re not working with you, I told her,” McClain said. “I was like, ‘Aw, damn,’” Jocelyn said.

“I always loved learning, but I did not grow up with the discipline, the work ethic, so when Jeff gave me that challenge,” Jocelyn said, “I was like, I want to do that. It just felt right.”

“If you make it several months in the program things are probably going to happen for you,” McClain said. “Then we start to discuss actual management, which we did with her. We signed her in 2014. At that point we started making calls and opening doors.”

Nothing that’s happened since has been an accident,

“Jocelyn is where she’s at because of a lot of hard work, but also support and encouragement,” Peeler said. “I have nothing but love and respect for all she’s done.”

That’s not saying there weren’t bumps in the road.

“One time we had written a song and I didn’t want a certain lyric to be a certain way,” Jocelyn recalled. “Mind you, I’m 16 at the time and stubborn. If I didn’t get my way, I’d freak out. I said no to a lot of things in the beginning.

“Ally (Peeler) and I went on a walk. She was trying to cool down the fire within me. She said a song is like a child. It goes off into the world and it influences other people and it gets influenced. It is constantly growing. I liked that.”

Of her journey, Jocelyn said, “There’s only growth, patience, teaching, learning going on in this process.”

She counts McClain and Peeler among “older friends who have been really there for me when I needed them and that have affected my life in a positive way.”

Following her team’s advice, she puts herself out there. Connections she’s made at Fox and Paramount offer “great potential we’ll capitalize on later,” McClain said.

Even with mega fame a real possibility, Jocelyn’s committed to Omaha.

“Home is where the heart is, and my heart is in a lot of people here. I’m at home anywhere I go in the city. I feel love. This is the stomping grounds.”

What’s come her way already could be a real head trip, but Jocelyn’s being chill. “It’s as simple as simple can be,” she said. Everyone around her believes she’s grounded enough to handle whatever comes next.

Meanwhile, she and McClain are leveraging her success to explore the creation of mentoring programs with the Millard Public Schools (she’s a Millard South grad) and Greater Omaha Chamber of Commerce. The goal is “teaching what it really takes to make it in whatever you want to do,” she said.

The messaging of Jocelyn’s album “is spot-on” with initiatives around young professionals and creatives reaching their dreams, McClain said.

“One of my friends said she didn’t like it here because it doesn’t have this and that, and I said, ‘Well, then, create it here. Be the first person to bring it here.’ Why leave?

If you do, come back when you’re done. Help build.”

Should breakout success happen the way it’s expected to for her, she hopes “Omaha’s the next city” everyone wants to be in.