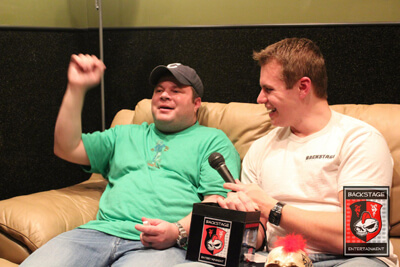 The Funny Bone brought one of my favorite comedians to town this past weekend, John Caparulo. Many people know John, or as many of his fans call him “Cap,” from his stand-up special called “Meet Cap.” The feature can be seen as an instant stream on Netflix if new fans would like to check it out. Cap has also appeared on television on shows such as “The Tonight Show” and as a regular guest on the E! show “Chelsea Lately.”

Starting on Valentine’s Day night at The Funny Bone, he mentioned onstage during his stand-up act he recently had gotten married this past May. During our interview with him after the show, we asked what his wife thought about him being gone for their first Valentine’s Day as a married couple. He said that she was fine with the issue and they’ll be celebrating when he gets back home. Besides, John mentioned, he got her a ring, paid for her car, and she has his credit card so does she really need a stuffed bear?!?

Cap was great to talk to and felt like the entire interview was just a normal conversation with him. Talking about what’s been happening in his life lately like his marriage, upcoming stuff for his stand-up, and other things. We even went to our “BSE Box” for a couple questions that fans have submitted for our interviews.

See the link below for our full 40 minute interview with John Caparulo as well as photos from the interview on the Backstage Entertainment Facebook page. Also be sure to find Cap online at www.johncaparulo.com and “Like” his Facebook page at http://www.facebook.com/johncaparulo.