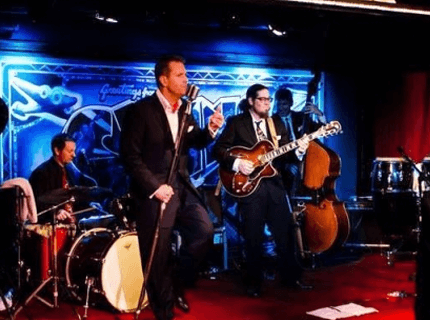 Vocalist, bandleader and songwriter Johnny Boyd makes music that swings with the best of them. His sweet and heartfelt crooning is spectacular, truly brilliant.. The Fritz Magazine says Boyd is “a crooner who could make any girl swoon.” JazzReview.com raves Boyd “touches on so many musical styles. But he does it with amazing talent and sincerity…setting himself apart from his peers…Johnny Boyd is a talent to be reckoned with.” Atomic magazine concludes their review with this about Last Word In, the disc that brought him back to his fans after a hiatus, “Whether music is fuel for your feet or food for your soul, this album is essential. Last Word In can be described by the last word in this review: Perfect.”

Boyd’s vocals truly are perfection and he is on the shortlist of Hoodoo favorites. I’ve been looking forward to his Reverb Lounge gig for a month. Boyd currently fronts his own band based out of Portland, Ore.. Together with the fabulous players he has assembled, Boyd mixes fan favorites from his days with the great band Indigo Swing with his current solo work. Boyd was the voice at the heart of Indigo Swing, one of the seminal bands of the 1990s swing revival. And he’s still got it, with that delightful, golden voice soaring and sparkling with added finesse and depth. His most recent disc is Never Been Blue (Cliffdive Records).

Make tracks to The Reverb Lounge Tuesday, March 24, for Johnny Boyd and his Sensational Swing Lover Band. This show is only their second Nebraska appearance since he returned to performing. Don’t miss this show , if you love heavenly vocals and a top-flight band that can jump, swing and tear it up. Doors at 7 p.m. and show at 8 p.m. Cover is a bargain $10. See johnnyboyd.com for a preview.

It’s a busy week for amazing music with another Hoodoo favorite, Davina & The Vagabonds, hitting the metro for two shows. Davina has a truly remarkable voice, with a broad range and a distinctive interpretive style. Most of all, she performs with a sheer joy that is infectious. Her band, featuring great players on trumpet, trombone, bass and drums (no guitar) match her in musicianship and enthusiasm for the music. Together they put down a great mix of original tunes and choice covers: sizzling and sassy. Their most recent CD is Sunshine, and they just completed two nights of live recording at The Dakota, one of their Minneapolis hometown stomping grounds. Downbeat magazine says of Sowers that she is “a one-of-a-kind performer…blurring territorial lines between jazz and blues.”

Both shows are also CD release parties for the Blues Society of Omaha’s new compilation disc, Deeper Blue. Davina & the Vagabonds are among the regional artists featured on the disc. The two-disc project includes 28 tracks from local and regional artists. See facebook.com/BluesSocietyOfOmaha

The Blues Society of Omaha and The 21st Saloon host a tribute and memorial jam in honor of Johnsen Brothers’ bass player Steve Johnsen, Sunday, March 22, 3 p.m. Johnsen passed away in February. The Johnsen Brothers have been a respected mainstay of the Omaha-Council Bluffs blues scene for decades. Doors open at 2 p.m. and music begins at 3 p.m. Proceeds from the day will be donated to the hospice that helped care for Johnsen during his final days, according to the wishes of Johnsen’s widow Nancy.

WRITER’S NOTE: I just heard from Dean Dobmeier that Holcombe’s show for this Sunday is cancelled due to illness.

Dean Dobmeier’s and Gary Grobeck’s Sunday Roadhouse presents Malcolm Holcombe at Reverb Lounge, Sunday, March 22, 5 p.m. Music City Roots says of singer-songwriter-guitarist Holcombe, “the core of each cut is Holcombe’s voice, which can growl like a cement truck in low gear or mellow into a heart-tugging croon, and his guitar playing. Malcolm plays with his bare fingers and his percussive attack makes it easy to overlook the precision with which he plays.” Holcombe may not be a name you know, but he has spent a lifetime making music, starting in his early years living in the Carolina hills. See malcolmholcombe.com and sundayroadhouse.com.

Oklahoma blues-rocker Dustin Pittsley returns to The 21st Saloon Thursday, March 19, 6-9 p.m. The Dustin Pittsley Band is an in-demand act around their hometown of Tulsa. None other than Ian Moore says of Pittsley that he is “a great talent and a gentleman. Dustin has the kind of soul that you need to be a real player. When he sings and plays it’s not just his voice and hands, it’s his soul talking through them, and that makes it a special thing.” Pittsley mixes up blues influences from Freddy King to Jimi Hendrix. In 2010 he took home the Beale Street Blues Kings Award at the International Blues Challenge, where he has represented the Blues Society of Tulsa several times. See dustinpittsley.com.

Josh Hoyer & The Shadowboxers join The 9s for a double-bill of soul, funk and R&B at Slowdown Saturday, March 21, 9 p.m.