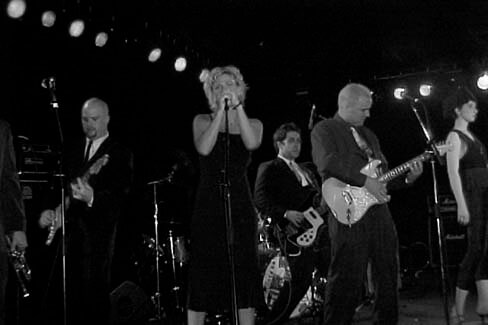 Before No Doubt’s Gwen Stefani started whining about being “just a girl,” another blonde-haired, blue-eyed 19-year-old was beginning her career as front woman for local ska band, Jimmy Skaffa. Formed in 1992 by ex-members of local ska bands Knuckle Junction and Porkpie Conspiracy, Jimmy Skaffa kept adding members until it consisted of 16 different people on the roster, including singer Robin Goodwin, although she wasn’t recruited until 1995.

Anyone able to witness The Ranch Bowl’s hey day surely caught wind of the incredible horn section that defined the band.  Shortly after getting together, they self-released 1993’s Nobody Tells A Navy Man He’s Had Too Much To Drink on cassette. Soon, they were touring with Let’s Go Bowling, The Wailers and The Toasters.

“It was crazy at first. When I was 19, I didn’t think twice about the decisions I made. I didn’t realize it would be such a long going thing in my life. I was with them for 8 years and they had already existed 3 years before I joined,” Goodwin recalls. “When I joined, it was duel front people. I think after many shows of many people saying, ’hey, let the chick sing,’ the other guy quit. When I took over, it was a lot of fun. It was always interesting because there were often 7 or 8 guys and me in the band.”

Goodwin was used to being around the boys. She had 7 brothers growing up.

“Being with a bunch of guys is normal for me. Maybe that’s what attracted us to each other in first place, however there were a lot of jokes and a lot van rides where I was crying. They liked to pick on the weak. It was hard because Dan [Stewart] and Jeff [Heater] were so cruel, but so funny so I was crying and laughing at the same.”

After their first album was released, only two short years later, No Doubt would dominate the mainstream music scene with its ska-infused pop. Goodwin herself was both surprised and a little bummed when No Doubt emerged with Tragic Kingdom in 1995.

“First time we heard them, someone said we sounded just like them,” Goodwin says. “When Tragic Kingdom came out, we realized we were never going to make it [laughs]. I was already wearing the sweatpants, the half-shirts and platform sneakers.”

Two additional recordings were served up by Jimmy Skaffa after forging a partnership with Omaha’s Two Olive Martini Records:  the 1996 7″ single Bitch on Sunday and their full-length debut, Cliché.   The next step for Skaffa was to go national, which they attempted by signing with Tucson’s Slimstyle Records and releasing their second full-length album, 1999’s Six Bullets Past Midnight. But their dream of going national was short-lived. Two key members, including Zack Hexum (Nick Hexum of 311’s little brother) moved to each coast and subsequently, the band took an extended break in 2002. In 2005, they reassembled for a Hurricane Katrina benefit and felt that spark all over again. So it’s no surprise that several members decided to organize a 20-year reunion show, commemorating the band’s extensive run back in the day. Hexum is the only member not participating.

“It was mostly Corey [Randone] and Dan’s idea. They missed it. There was talk of it last year, but it fell through,” she says. “This year, we were more organized. We started planning it many months ago in the summer. I’m not really surprised Zack can’t make it. Last time I heard, he was a pretty serious musician. He doesn’t reminisce about the past like we do.”

It’s easy to daydream about what could have happened if Jimmy Skaffa stuck it out all those years ago. After all, Omaha’s music scene is nothing to scoff at these days. Goodwin is still confident she made the right choice when she moved to New York City.

Goodwin has a life that’s far from dull. In fact, she fronts an all girls Motley Crew cover band, which is obviously quite the departure from Jimmy Skaffa. Motley Crew, if you recall, is one of the most chauvinistic and sluttiest bands in Hollywood. The dichotomy is blatant. It shouldn’t be happening.

“You can look us up. It’s really funny when we show up for a gig. The sound guys assume we know nothing and ask us if we really play our instruments. They treat us like little girls in a mocking way,” she says. “When we do sound check, as soon as we play the first song, they pick their jaws up off the floor.”

People can pick their jaws up off the floor when Goodwin fronts Jimmy Skaffa again for this once in a lifetime reunion show at The Waiting Room. Goodwin will presumably be in top form.

“I’m excited and nervous,” Goodwin says. “It’s going to be weird to sing songs I haven’t sung for so long. All the lyrics are all there. Most of the songs I sing I wrote, so I remember them. Thank god.”