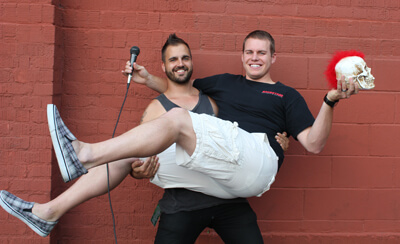 Heavy metal fans made themselves well known Tuesday, July 2nd as Sokol Auditorium hosted the tour featuring Killswitch Engage, Miss May I, The Word Alive, Darkest Hour, and Affiance. For a while now, many of the fans of these bands were anxiously awaiting that Tuesday night because it was the first time many of them were seeing Killswitch Engage with the new frontman, Jesse Leach. Jesse was the original lead vocalist of the band and after the recent news of Howard Jones leaving the band, Jesse took the opportunity to return.

Backstage Entertainment caught up with four of the bands performing that night in interviews. First, chatting with Darkest Hour and how they heard about getting on the tour after As I Lay Dying had to drop off because of the recent allegations of lead vocalist Tim Lambesis. Next, hearing about the recent tour and transition with Jesse in the band from Justin Foley of Killswitch Engage. Justin was thrilled to have Jesse back in the band and felt the new album has been a huge success for the band.

Affiance did an interview right before taking the stage and opening up the night. We talked about their most recent album and how Dennis, the lead vocalist, found something unique to do while taking photos with fans. He picks up anyone who wants a picture with him and holds them in his arms, he said it was just a different way than the normal poses people do. Lastly, we talked to Levi and Ryan with Miss May I. They had a blast with our “BSE Box” and the actions that went along with the questions. From asking the interviewer a question to being on “The Jerry Springer Show,” these guys appreciated how different our interview was from normal ones they typically have.

Make sure to check out the links below to watch all of the interviews.

Miss May I Interview