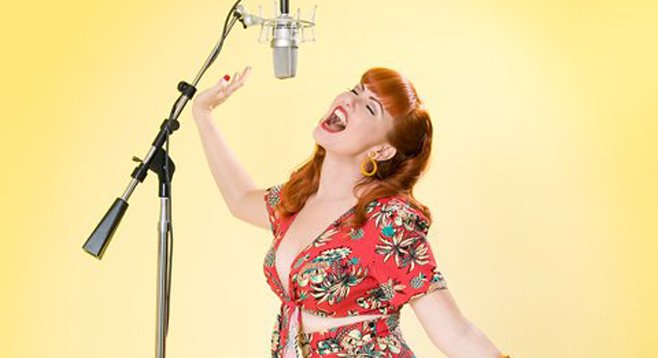 Rockabilly siren Kim Lenz returns to Omaha for a much overdue appearance at The Reverb Lounge Wednesday, Sept. 16, 9 p.m. If there was any doubt about her rockabilly fire nearly 20 years after she first broke onto the scene, Dale Watson’s Ameripolitan Awards named her 2015 Rockabilly Female. The Austin Chronicle raved about Lenz’s release noting that her “snap, crackle, and romp that breathes new life into the familiar tropes of roots revivalism” while noting that “her well-oiled band’s scramble of rockabilly and jump-blues gains even more traction by employing elements of classic transistor pop songcraft.” While Slug Magazine said what fans of Lenz have known for years, “Kim Lenz and Jaguars = Gene Vincent + Janis Martin + Ronnie Dawson. When it comes to female rockabilly vocalists, it’s a hard road. You’ve got to exude sex, display vocal range, all the while matching the intensity of their male counterparts. Kim Lenz not only accomplishes all this, but manages to turn it into an art form.”

Be prepared for plenty of jumpin’ tunes delivered with Lenz’s spitfire vocals and a few belt-buckle-polishers, as Lenz has referred to her hip-grinding ballads. The singer, currently based in Los Angeles, was seen often at Omaha’s old Stork Club venue during the 1990s swing and rockabilly revival. She’s been back on the scene for a half dozen years after taking a hiatus. This should be a great show. Travis Sing’s Township and Range project will open the night.

The band receiving the most points in the first round of the fifth annual Nebraska Blues Challenge was The Rex Granite Band featuring Sarah Benck. On Sunday, Oct. 4, they will join the highest point getters from the remaining two preliminary rounds to decide who will represent the Blues Society of Omaha in the 2016 International Blues Challenge in Memphis at the end of January 2016. See blues.org.

All performances are at The 21st Saloon, 96th & L. There is a $5 cover charge that goes toward the cost of the events. The remaining preliminary rounds and participating bands are:

There will be more to come on this Saturday’s In the Market for Blues Fest, happening Saturday, Sept. 19, 3 p.m.-12:30 a.m. in the Old Market. Organized by Hector Anchondo and E3 Music Management, a $5 wristband lets you into participating venues The Hive and The Harney Street Tavern to catch music from local and regional acts.

Hoodoo heroes Dave and Phil Alvin have a follow up due out this week to their acclaimed 2014 release, Common Ground: Dave Alvin & Phil Alvin Play and Sing the Songs of Big Bill Broonzy (Yep Roc). The musical reunion of the California roots rockers was recognized with both Grammy and Blues Music Award nominations. The brothers’ follow up, Lost Time (Yep Roc), hits stores Friday, Sept. 18. The disc is a rockin’ affair that pays tribute to more of the Alvin brothers mentors and inspirations, including the great Big Joe Turner who was not only a hero to the young Alvins but became a close friend of the family. Other artists who get the Alvin brothers testifying, rockin’ testimonial include James Brown, Leadbelly, Willie Dixon, Blind Boy Fuller and Leroy Carr. Find out more at davealvin.net and yeproc.11spot.com/music/artists/dave-alvin/dave-alvin-phil-alvin-lost-time-pre-order-9-18.html. See a write up that includes a preview track from the disc at thedailysouth.southernliving.com/2015/08/25/dave-and-phil-alvin-song-premiere-from-their-new-album-lost-time/

Sunday Roadhouse moves to Thursday for a special show Thursday, Sept. 17, that is a double-bill of engaging singer-songwriter Robbie Fulks and guitar legend Redd Volkaert. The show hits The Waiting Room with doors at 6:30 and show at 7:30 p.m. See sundayroadhouse.com for more.

Meanwhile The 21st Saloon Thursday blues series heats up with a performance by impressive and versatile guitarist Jeff Jensen fronting his own band Thursday, Sept. 17, 6-9 p.m. Jensen has been seen here previously as the sideman for Brandon Santini’s fiery Memphis blues band. Jensen is a skilled guitarist who has been fronting his own band before and after working with Santini. The Portland Tribune says “Jensen is a solid guitarist, phrasing deftly with just enough macho to make the boys happy and just enough lyricism to make the little girls swoon, and vice-versa.” See jeffjensenband.com.