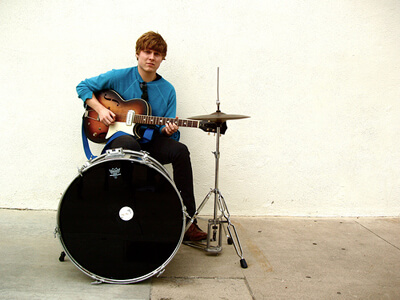 Nick Lowe may have proclaimed his appreciation for his record company with his tongue-in-cheek ode “I Love My Label,” but San Francisco garage rocker Ty Segall genuinely is head over hills for his musical home, Drag City Records.

“Drag City is the f–king best man. They’re really cool and they give a shit,” Segall says.

Segall says its the sort of label where he can call them whenever, just to discuss ideas or talk shop. There’s a friendship there.

And it’s something Segall has been blessed with before. Goner Records, which released two earlier Segall records and plans on doing a singles compilation, also is the sort of label that takes late-night calls.

Segall is planning on doing a release with another favorite label, garage rock stalwart In the Red Records. Being able to work with labels he admires seems like a dream to the San Francisco-based Segall.

“It’s totally mind-blowing to be able to do that,” Segall says.

Segall says he was about halfway through recording his latest album Goodbye Bread, which came out earlier this year on Drag City, when he decided to send portions of the new music to some people.

Segall says the material was a departure from the straight-ahead garage rock of 2010’s Melted. He had already met Drag City’s Dan Kaye and was a member of Sic Alps when they signed to Drag City a year prior to Segall joining the label.

On the basis of those first six songs, Drag City offered to release the record.

“They wrote back right away and they were extremely excited,” Segall says.

Meanwhile, Segall focused on making the rest of the record. He recorded with his friend Eric Bauer and pretty much just played everything himself.

Segall says he usually records songs as he’s writing, so the steps are intertwined.

“(I) get all intense and weird with recording,” Segall says.

Goodbye Bread lent itself to that approach, since it was so focused on songs and took a bit more to figure out.

“We tried to tone down the effects and the level of distortion on top of it,” he says.

Segall says he sought out more shimmery, shiny guitar tones and tweaked other parts of his playing. Instead of fuzz guitar, some songs saw Segall playing a 12-string. Effects were dialed down and vocal tracks were pulled up in the mix. Suddenly, Segall went from making garage records to making something that pushed toward a songwriter vein.

“It’s all about the little things you can do to make it like that,” Segall says.

Segall says he’s accepted that he can make that change, because he’s not tied down by a band name or a core identity. Being a solo artist means there are no rules. He can make a garage record, a songwriter record or, if he wants to, a rap record.

“I love that fact. You don’t get pigeonholed to a specific sound or genre,” Segall says.

With that sense of freedom, Segall spent time working through his song-centered ideas and when he felt the record was done, that was it. When that moment hit, Segall was struck by the fact that he had been the only person to play on it.

“I really wanted other people to play on it.”

He’s booked studio time so he and his touring band can cut some tracks together for a future release.

And the songs on Goodbye Bread take on a new vibe with Segall and the band playing them live. It’s faster, more aggressive and of course, a lot louder. Segall says he seeks that difference in sound between studio and live performances.

“I personally like seeing songs change a little bit when I see a band live,” he says.