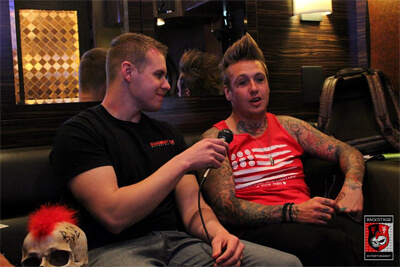 Backstage Entertainment’s biggest day of the year comes from LAZER 103.3’s show LAZERfest. The radio station is in Des Moines, IA, and for the past two years the show has been held at the Central Iowa Expo in Boone, IA. For the past three years Backstage Entertainment has been covering the event with backstage interviews and a look at what goes on backstage at the big radio festival. This year was no different. With interviews from eleven different bands and some footage from what it looks like backstage, we gave fans an inside look at the lives of some of their favorite bands.

There were fourteen different bands performing that day with two different stages set up to cut down on the time in between each performance. A very smart idea when it comes to an all day festival. Since Backstage Entertainment spent pretty much the entire festival backstage doing interviews and taking behind the scenes footage, we heard from fans about performances from each band. There were so many good reviews on the show it will definitely be something to look forward for next year.

All That Remains Interview