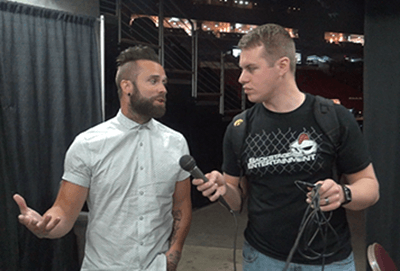 Backstage Entertainment’s biggest day of the year comes from LAZER 103.3’s show LAZERfest. The radio station is in Des Moines, IA, and for the past four years Backstage Entertainment has been covering the event with backstage interviews and a look at what goes on backstage at the big radio festival. This year we got a chance to take fans backstage again in a different setting, while doing the interview. With interviews from five different bands and some footage from what it looks like backstage, we gave fans an inside look at the festival.

There were many different bands performing that day with two different stages set up. This year one of the stages was outside across the street from the Wells Fargo arena and the other was inside the arena. Since Backstage Entertainment spent a lot of the festival backstage doing interviews and taking behind the scenes footage, we heard from fans about performances from each band. There were so many good reviews on the show it will definitely be something to look forward to year after year.

Make sure to check out the links below for our interviews!