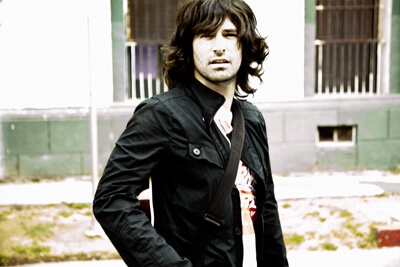 It’s late in the day; the sun barely blinks over the horizon. The familiar bleached light bounces off the pavement and through the dirty windshield while white stripes flicker below like a busy signal on the highway. The man behind the wheel is lost. That man is Pete Yorn, his trademark Prince Valiant mane tossing in the wind blowing through an open window. He wears the same T-shirt and jeans he wore earlier that day in ARC Studios, where he stood behind a microphone, “cans” on head, singing, while producer Mike Mogis listened and twisted the dials atop the massive control board, glancing up occasionally to watch Yorn through the window. It was 2008 when Yorn found himself in Nebraska only a few weeks after finishing recording sessions with producer and living legend Frank Black of Pixies fame for Yorn’s self-titled rock record, which has become known by some as “the Black album.” Between those Frank Black sessions and the release of the “Black album” in September 2010, Yorn released the Mogis-produced Back and Fourth (in June 2009), along with a collection of duets with Scarlett Johansson called Break Up , recorded two years earlier but released in September 2009. It is only now that Yorn has had a chance to really perform the songs on the “Black album.” “Ever since I recorded those songs I’ve been excited about the opportunity to play them live,” he said from his home in Santa Monica, Calif. “I haven’t been out touring in a bus in a year. I’m ready to play some good rock shows again.” Yorn recalled the contrast between Frank Black’s recording style and working with Mike Mogis. “They’re both guys who I really respect a lot and enjoy working with,” he said. “Mike is more detailed, more layering and I knew that going in. I also knew with Frank that I’d only have five days (in the studio) to capture something fast and not be too fussy about it. It was the antithesis of what we did in Omaha. That said, it’s all rock and roll, and both have different energies.” The final products also couldn’t be more different. Yorn’s eponymous album, which will be the center point of Saturday night’s concert at the Whiskey Roadhouse, is barebones and abrasive, a rough ride that, on songs like “Velcro Shoes” and “Badman,” sideswipes garage rock without losing any of Yorn’s songwriting depth. Black’s influence saturates every track, from the chugging guitars to Yorn’s gravelly vocals. In comparison, Back and Fourth is downright ornate; a soulful, personal album with the subtle touches that Yorn — and Mogis — are known for. Instead of five days, Yorn spent two-and-a-half months in Omaha working on Back and Fourth . Over that time, he became immersed in the Omaha scene, hanging out at a wine bar in Dundee, eating at a Middle Eastern restaurant downtown, becoming involved in the spiritual center of Omaha, and going to rock shows. Maybe you were at one of the clubs on a night when someone leaned over, pointed and whispered: “ Pssst … look . Pete Yorn’s here tonight.” “I never go out when I’m home; it’s very rare that I go to bars,” Yorn said. “But when I was there, I wanted to take it all in. I went to a number of shows at Slowdown. I remember going to see The Notwist after a group of kids told me about the show. I’d never even heard of them. That night I ran into the guys in Cursive and a bunch of other people I’d met. I started to realize that there was a cool group of really creative people that made up the scene, a tightly knit scene, and from an outsider’s perspective, it was refreshing to see.” But just as memorable about his months in Nebraska were the times Yorn spent exploring the highways alone. “After we laid down tracks, there was a lot of down time,” Yorn said. “I like to go on drives. I had a car and drove around for hours, exploring the area. “One time I was driving in the middle of the day and heading south. I was on my cell phone talking to someone in New York and became distracted. I looked around and thought ‘Where the hell am I?’ I was surrounded by cornfields. I love getting lost in cornfields.” Yorn said for Saturday night’s show, expect to hear not only songs off the “Black album,” but from his full catalogue, including his landmark first album, musicforthemorningafter . “When I go see a band and they play 20 songs I’ve never heard before, I think, ‘What the f*** is this?’ I’m not interested in doing that. It’ll be a balanced show. I’m excited to see what the catalyst in every room will be. There are always different people yelling different s***. I love it when people yell at me.” Pete Yorn plays with Ben Kweller & The Wellspring, Saturday, Feb. 19, at Whiskey Roadhouse at The Horseshoe Casino, 2701 23rd Avenue, Council Bluffs. Showtime is 8 p.m. Tickets are $25. For more information, visit horseshoecouncilbluffs.com.