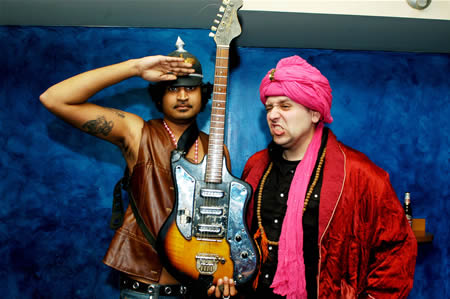 Mark Sultan has re-enlisted with his deadliest co-hort, King Khan, in order to incite their own holy war to reclaim rock ‘n’ roll.

Sultan and Khan have reformed the King Khan and BBQ Show, after suspending operations following a tense trip to Australia.

In the interim, Sultan spent a busy 2011 releasing his own one-man take on garage, early rock and doo wop, putting out three albums in the course of a few months.

But by the end of the 2011, Khan and Sultan were recording again and played a handful of shows in Canada and Berlin. Brotherly squabbles behind them, the King Khan and BBQ Show is ready to roll again.

To explain what’s next for the duo, the opinionated and bitingly funny Sultan answered a few of the Reader’s questions via email.

The Reader: So was it only a matter of time before you and Khan rejoined forces?

Sultan: Well, ya. We never were fatalists about any of this. We were always brothers, which made the fighting and ‘break-up’ way more pronounced, sure, but it was mostly the ‘press’ that made it all into something more than it was. Even when we were at maximum hatrox, we talked about reconvening one day.

What brought about the decision to play together again?

Sultan: We knew we would, just not when , how or where. Enough time had passed, and we both got our shit under control at home and abroad. We hung out a little bit, etc… We ended up doing both a show in Toronto and in Vancouver, which, though weren’t 100%, made it very clear that we were back, and that we were still brothers. A few months later, we played on our home turf in Berlin, a city where we started a few years back. The show was touching more upon the magickal energies we could tap into at our apex. So we knew it was possible to tour again, when we could/want.

Has the dynamic between you two changed much since the end of the last string of KK & BBQ Show performances?

Not very much. It’s still a fart joke. Just that there is no more animosity or weirdness. It’s funny. Most bands will stay together, even when they hate each other, just for money or whatever else. We didn’t, and I think that is paradoxically what saved the band and friendship.

What continues to draw you back to working with Khan?

Well, that question is a bit heavy-handed, as though I came begging to play with him again. That couldn’t be further from the truth. The truth is that it was just the best time and we kind of gravitated back towards the band – both of us. For different reasons, maybe, but for honest reasons. I love working with him, because we are old friends. And I love the music and energy we create.

Beyond these run of shows, do you guys have any recording plans?

Possibly, but we need to come up with songs first.

I would personally wanna piledrive the more ultra-rock’n’roll stuff over the listeners’ heads, to remind them what’s what, whereas I think Khan is dabbling more in psych-y elements. I think I drained my personal psych well on my last few solo albums. So, I would predict a meeting in the middle? With doo-wop smeared like shit onto all of it.

When you’re playing live, does it feel like you almost play the role of straight man to Khan’s stage antics?

Yes, totally. That was always the point to this band: Yin and Yang. But, unfortunately people take shit really seriously. If you know me, I am funny, etc. Yes, I have a mean streak, but the humour side of our band is very much collaborative. I chose to take this role to emphasize Khan’s penchant for all things extrovert. But in doing so, I have lost credit for my own massive contribution to the songs, performance and aesthetic. People consume music solely as image, nowadays. It’s something I honestly did not see coming, specifically within this genre. I made the mistake of not seeing how this genre could be co-opted as mainstream culture. So I lost. But music fans won, and that’s all that matters.

What does the restart of the KK & BBQ Show project mean for your solo endeavors?

I mean, I have always done solo stuff; since, before and during. I do what I want, even if nobody cares or is into the brand name of this band. Both of us will continue to do a million things. We are artists.

Over a year ago, you posted a manifesto of sorts on the war on rock ‘n’ roll, which hit me as a plea to take rock away from its almost suburban banality to back to its raw, immediate, dirty working class roots. How does the revival of the KK & BBQ Show fit into your war on rock ‘n’ roll?

We talked at length before jumping back, headlong into this band. One main point we hope to get across in touring again is exactly that: that we are gonna use whatever power we have to break the spell over the zombified kids who worship at the alter of the false icons of retro-grunge, roots-less apery and media-spun idoltry. We will play real rock’n’roll. We will channel its magick. We will drink the vomit of debauch. We will force dancing and diarrhea. We will turn sound into throbbing genitalia. This has always been our mission, and we feel but for a couple of bands, people have forgotten what it’s all about. The manifesto was the war plan, this reunion is going to be the attack.