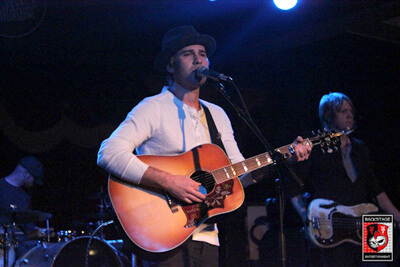 The Whiskey Roadhouse and Q98.5 teamed up for a spectacular show on Wednesday, January 16th. It was probably the first big show of the new year in the Omaha/Council Bluffs area. The band from Los Angeles, Lifehouse flew into town Wednesday morning for a sold out show at the Whiskey Roadhouse inside the Horseshoe Casino. Tara Vaughn, local singer from Omaha, opened the show singing her songs as well as a cover by Alicia Keys on piano.  Jason Wade, lead vocalist for Lifehouse, said it was great to play in front of a crowd with lights, sounds, and a bunch of screens in the background. The gambling area can clearly be seen from the venue which makes a unique feel for anyone performing.

The band recently released their latest album, Almería, with the first single being played on the radio from that album being “Between the Raindrops” featuring Natasha Bedingfield. That song was the last song performed that night and you could tell it was already a hit with the crowd singing along. Most of us know Lifehouse from their first hit, “Hanging by a Moment,” which was released in 2000. Since the band’s start they have put out six studio albums with each one producing multiple hit songs.

The concert itself was very relaxed and interactive. Right away the band told us they did not come prepared with a setlist but were going to be taking requests the entire night. After each song the crowd would yell titles of their favorites and the band would do their best to play them. The band was also unplugged during the show and did not bring their electric guitars which made for a more intimate feel. Overall, it was a great night for music with Tara Vaughn doing a great job warming up the crowd with her amazing voice and then Lifehouse putting on an amazing performance.

Make sure to check out photos from the night on the Backstage Entertainment Facebook page.