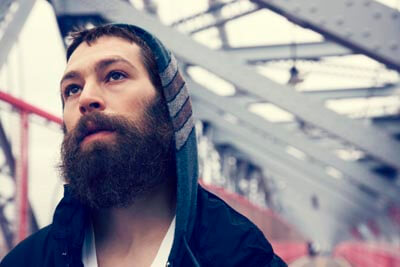 Matisyahu is rolling now, in a musical career that began in 2004.

That’s why the rap-reggae-rock triple threat says he doesn’t have a set pattern or schedule for how he works as an artist.

So far the 32-year-old artist has released three studio albums, plus multiple live releases and a remix record.

His two biggest studio albums were separated by more than three years. It’s been more than two years since the last record, 2009’s Light.

But that doesn’t mean that Matisyahu has put work on a new album on the back burner.

“I’ve been working on it for about two years now,” he says. “I don’t really stop writing.”

In fact, he’s also started to work on an album after the next album. He went to the Ukraine last fall to work on lyrical content with one co-writer and has since been working with the Dub Trio to write music for that material.

Two years ago, he also started sessions, mostly for fun, with producer Kojak. Those tracks are more programmed hip-hop/pop tracks that are celebratory in nature, Matisyahu says, adding that that record is almost complete.

He still doesn’t know how, when and what will be released, though he’s thought about whether or not they could be released separately or together.

“I think they are both going to be amazing and very different,” Matisyahu says.

Until then, Matisyahu is letting the songs take on their own life, as he adds songs to his live shows.

In fact, it’s his reputation as a live artist that first jump-started the Hasidic Jewish artist’s career, when the 2005 live album, Live at Stubb’s, caught on thanks to “King Without a Crown.”

That album was such a hallmark at the beginning of Matisyahu’s career that he revisited it, by releasing Live at Stubb’s, Vol. 2, earlier this year.

“I wanted to do another live record because that’s the nature of the kind of artist I am,” Matisyahu says.

The sound of his live band set is a big part of who he is as an artist, and going back to Stubb’s in Austin, Tex. seemed like the sensible decision.

“I wanted to try to capture that again,” Matisyahu says.

This time, Matisyahu had a wealth of newer material, a different backing band and a different view of Stubb’s. His first set was recorded indoors at Stubb’s. The new one placed Matisyahu in Stubb’s sprawling backyard amphitheater.

Matisyahu says the live records give his fans a view into what he’s creating as he and his band work together. The sound changes and evolves over the course of touring. It’s something that doesn’t always come out in the studio.

“If I could, I would make a live record after every tour,” he says.

The performances, Matisyahu says, also keep getting better. It’s a commitment to live music that started forming when Matisyahu was just a music fan, deep into listening to Phish. That band’s marathon jams showed him just what power music could hold for a listener in a concert setting.

“Being exposed to those shows as a teenager really shaped my views of what the live show could be,” he says.

There’s a spiritual, almost religious, feel that can be communicated in playing music live. For Matisyahu, that element is combined with his true spirituality, as he sings about his Hasidic Jewish faith and relates teachings and other elements of faith through song.

“What I’ve tried to create with my music is an experience,” he says.

So unlike Phish, he’s more of a song-oriented artist. The trip he’s trying to take people on differs from the jam-band scene, though he strives to create moments for improvisation, where he and the audience can get lost in the music.

“That requires more courage than playing a song straight ahead,” Matisyahu says.

The hip-hop and reggae elements also move Matisyahu’s style from the guitar-driven rock show, as his music is heavy-bass, rhythm-oriented stuff.

Lyrically, Matisyahu says he’s weaving one cohesive fabric. He can intersperse them and have them make sense, which is what he does when he freestyle raps during band improvisations on stage.

“Really what I’m doing is singing one song,” he says.“It all fits together. It’s all one narrative.”