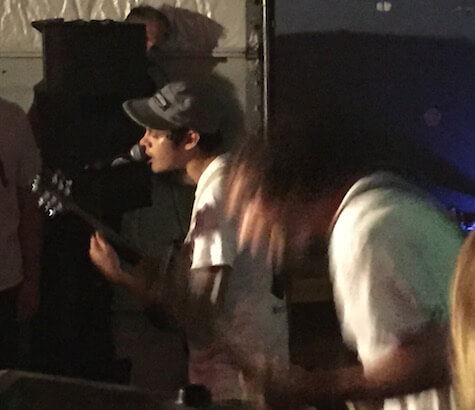 They don’t call it The Sweatshop Gallery for nothing. Saturday night’s show in the converted garage behind Sweatshop’s art gallery in Benson was easily the most uncomfortable concert experience in memory. If you thought it was hot outside Saturday, you should have stepped foot into that concrete stink oven Saturday night. I felt like a chicken in a rotisserie or a hippie in Southwestern sweat lodge. Within minutes after stepping inside the bunker sweat dripped off my elbows and ran down my legs in salty streams. My shirt, my shorts were drenched, stuck in a layer of warm moisture against my skin, sweat broiling off my forehead and into my eyes. Stifling, suffocating. It was awful, but it was worth it.

Ceremony is a West Coast band that made their nut playing what has been described as “power violence” music, which is a form of hardcore punk. What made them stand out may have been their guitar work or frontman Ross Farrar’s vocal approach, which was a bit more “arty” than the usual hardcore screaming. Anyway, the band started as a hardcore act in ’05. Then slowly eased off and became more post-punk-ish after their album Rohnert Park came out in 2011. Then they signed with Matador and turned their back on hardcore altogether with the release of the somewhat boring Zoo in 2012.

Now comes The L-Shaped Man, which was released earlier this year on Matador and sounds like an Interpol/Joy Division tribute album. Farrar’s vocals went completely Ian Curtis/Paul Banks on top of music that feels like it was developed in a Joy Division/New Order sound incubator. Pitchfork hated it. I love it because I love that style of music, though at times the record is so derivative it’s chuckle-inducing.

How many of the 70 or so kids jammed into Sweatshop were there to see the old hardcore Ceremony vs. the new post-punk version, I do not know, though it didn’t matter when they launched into their Joy Division-fueled set opener that got the sweat-slick crowd jumping. In the heat and darkness, Farrar was in his element saying before he started that the gig already was the best show he’d played in Omaha, and telling the crowd to step right up, which they did. The band fed off the heat and energy, and the set boiled with a goth-dance-punk intensity that Bauhaus would appreciate.

While there were plenty of Factory Records moments during the set, the band — and Farrar — did something wholly unique live, pulling in abstract elements from their past to create a new sound that melded post-punk with something much darker. The crowd loved it and the room became a pit, with youth hanging from the rafters. If Ceremony could tap into this hybrid sound/energy not heard on their album, they’d be onto something that is entirely their own.

It was a varied night of music at ol’ Sweatshop. North Bay punk band Creative Adult was among the openers playing a heavy, rhythmic punk that was brittle and fun. Then came Tony Molina, another Bay-area guy I’d never heard of but who was nothing less than amazing playing pure power-pop influenced by ’70s icon bands like Thin Lizzy and Cheap Trick, but with more than a nod to J Mascis and Teenage Fanclub. Molina and a second guitarist weaved intricate harmonies that were Thin Lizzy taken to an extreme backed by a solid rhythm section on songs that rarely lasted more than two minutes. As badly as I wanted to get outside for some relief I couldn’t get myself to miss any of it. Utterly exhausting and exhilarating.

Yes, this will be in my top-10 (maybe top 5?) favorite shows of ’15, despite losing at least five pounds in water weight.