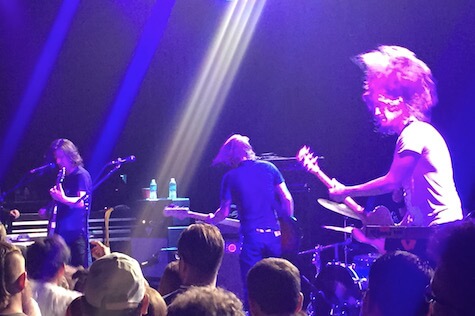 In this awkward political season when President Trump (roll that one around in your head for a few moments) is making headlines while stealing music from the likes of R.E.M., Desaparecidos punched back at ol’ Teflon Don by playing some (likely unauthorized) Trump audio as an introduction to last night’s SRO show at The Waiting Room.

There was Trump’s blather at its most boob-tatstic presumably “introducing” the band during the audio pre-roll, right before Omaha’s own took the stage and proceeded to blow the place up with their cynical brand of spirited, punk-fueled political discourse, spewing a world view that couldn’t be further away from The Donald’s own.

If last night truly was the last time we see this band on an Omaha stage, they certainly went out with a massive thunderclap. Easily the best set I’ve seen them play — on edge, angry, musically precise. They performed all the best stuff off their two full lengths in what Oberst said was a record-breakingly long set, even though it only clocked in at just over an hour.

The differences between the band’s two albums never stood in more contrast than they did last night. Payola is a more guttural record, more intense and straight forward than Read Music, Speak Spanish, which we forget was written during Oberst’s creative peak, right around the time of Lifted and just before Wide Awake.

Payola songs are all power and political invective reflecting a specific time and specific political issues, while Read Music provided broader social commentary, certainly more subtle and poetic. Oberst was more apt to scream the lyrics of Payola songs, while for tunes like “Man and Wife, The Latter (Damaged Goods)” (which probably could have been a Bright Eyes song) he pulled back and sang with a focused clarity. It was that contrast that gave last night’s show added depth.

The entire band was on point. Bassist/guitarist Landon Hedges’ role as a second voice never sounded more vital to the overall sound. Denver Dalley’s guitar solos were raw and majestic, and Matt Baum proved once again he’s one of the area’s most powerful drummers. Balancing it out was Ian McElroy, a bobbing head of hair slouched over his keyboard.

Between-song patter was kept to a minimum, except toward the end of the set when Oberst introduced “Marikkkopa” by underscoring the racial divide in Omaha and the rest of the country. Oberst said (and I’m paraphrasing here) just when he thought things were getting better, along comes Trump (“I shouldn’t even say his name.”) or another story about a black kid getting shot by cops for doing nothing more than buying Skittles. But at the same time, there’s Obama “who’s been a good president” and the liberation of South Carolina from its hateful Confederate flag. For a brief moment, Oberst sounded hopeful. Right before the band blasted into a song about one of the most vile people in the history of these United States.

I don’t know if the show ultimately sold out. They were selling tickets at the door when I arrived at 10. That said, I can’t remember the last time The Waiting Room was so packed — butt-to-belly from stage to back bar, a youngish crowd, with a handful of old folks like me standing in the corners, watching the crowd-surfing from a safe distance. Was it their last hurrah? Something tells me we haven’t seen the last of this band on an Omaha stage.