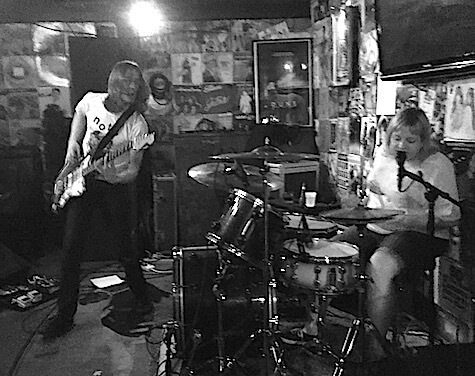 O’Leaver’s, 1322 So. Saddle Creek Rd., updated their sound system, again. I don’t know the specifics behind the technology.  Sound engineer Ian Aeillo can tell you. What I can tell you is there are now two massive stacks of speakers on either side of O’Leaver’s “stage,” and they sound good and loud (though one stack, on stage left, now blocks my view from one of my favorite leanin’ spots. Oh well…).

This is the third or fourth time O’Leaver’s has upgraded their sound system since the boys from Cursive and Chris Machmuller took over the venue a few years ago, and it just keeps getting better. The only thing they could do to make the place even better would be to take out the ceiling, add a band riser, knock out the partial wall that divides the raised seating from the hallway that leads to the bathroom and, of course, open that second outdoor patio. Or maybe just nuke the building altogether and build a new club, but that would take away all of O’Leaver’s craptacular charm…

The festivities that brought me to The Club Saturday night was the Digital Leather album release show for their new FDH album All Faded, where we got to see DL perform as an 8-piece — that’s like an entire bucket of chicken, but I’ll get to that in a minute.

First up was the The Hussy, the duo of Bobby and Heather Hussy, who were sort of celebrating the release of their own new album, Galore (Southpaw Records), their first release since 2013’s Pagan Hiss. Their one-sheet declares the new record “may be the catchiest and pop-iest record to date.” The record’s range and structure go way beyond your typical “garage rock” album but lacks none of that genre’s attitude. It’s the kind of rock record that Jack White could only dream of making. That said, the album sounds nothing like a White Stripes guitar-and-drum duo sort of record. The tracks are a full-band affair. This is the first Hussy LP with bass guitar added to the entire record, marking it as something of a turning point for the band. You need to hear it.

Anyway, The Hussy performed as a duo Saturday night, losing some of the depth heard on the new record but accentuating Bobby’s crazy-ass guitar gymnastics and Heather’s massive stick work. The duo shared vocals while Bobby bounced high kicks off the monitors and poked out the ceiling tiles with his guitar. Blistering and frantic.

And then came Digital Leather, sporting three keyboard players. Joining Todd Fink and Ben VanHoolandt on keyboards was Greg Elsasser of Capgun Coup. As detailed in this recent Digital Leather feature in The Reader, Elsasser will be replacing Fink for DL’s upcoming tour dates with Desaparecidos. That meant six people (and three keyboard racks) crowding the tiny O’Leaver’s “stage,” made all the more crowded by the 30 or so people who stood right in front of the band.

They opened with “Styrofoam,” played a few songs off All Faded and closed with a very special rendition of “Studs in Love,” that featured Bobby and Heather Hussy, who recorded their own version of the song released on the Digital Leather/The Hussy split LP that came out last year on Southpaw. So, eight people, one massive sound. “Studs in Love” is becoming Digital Leather’s go-to anthem and regular set-closer because, well, there’s nothing quite like it. Will they pull it out when they open for Desa in front of hundreds? I’d love to see how that crowd reacts.