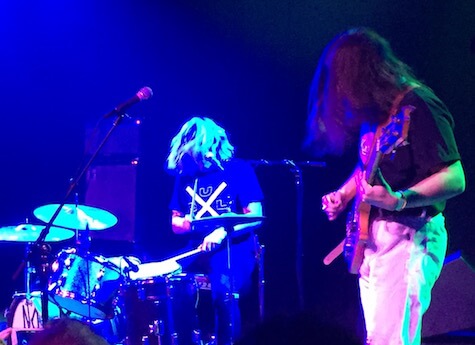 The last time Ty Segall came through town there was maybe 50 people at the show. Last Saturday night The Waiting Room was packed for his return in the guise of his heavy metal psych-rock trio Fuzz. Not sure what happened between that first Fuzz album and his second, but things have certainly blown up.

Right before Fuzz, fellow So Cal garage rockers Walter played a set of refined psych metal. Refined in that these guys were as tight as any touring blues or jazz band. Frontman Patrick Noland was an absolute beast on his left-handed Fender electric, effortlessly playing riffs and fills like the second coming of Stevie Ray Vaughan but with his own special brand of sass.

But like any great power trio, no one piece is stronger than the next. Bassist Misha Lindes was rock solid and drummer Ross Chait put on a clinic, right down to a Whiplash-quality drum solo toward the end of their set.

I went home afterward and downloaded Get Well Soon, the trio’s latest. Great record but nowhere near as precise or powerful as what was heard on stage. It’s as if these So Cal garage bands go out of their way to make their recordings sound dirty, which I guess is exactly what they do, but in this case it merely blurred the lines when they should remain laser sharp. I left a fan.

Next came Fuzz. Before I go on, let me point out how much time went into their (and Walter’s) pre-set soundcheck, much more than most touring indie acts who walk up to their instruments, play a couple notes and give a thumbs up. Segall and Co. were meticulous, spending at least 10 minutes adjusting different things in their monitors, their mics, etc. And as ironic as it seems considering this is a heavy-metal garage band, it made perfect sense. They we’re going for a specific sound that required everything be just right to sound authentic.

In the end, the Fuzz’s futzing was worth it. The Waiting Room once again proved Saturday to be the best sounding rock concert room in Omaha. Fuzz blazed right out of the starting gate, blowing out a style of rock with a simple formula centered around Chad Ubovich’s rugged, bluesy bass lines made all the more majestic by Ubovich’s bronze face paint — he looked like a golden tin man beneath a shoulder-length shag. Despite guitarist/vocalist Charlie Moothart’s solid riffs or Segall’s blazing stickwork, it was those bass lines that mattered most with these songs.

From an old-school perspective I was reminded of Sabbath, Deep Purple and Robin Trower; modern-day comparisons include John Dwyer and the dreaded Jack White, two long-time garage-rock veterans who you must acknowledge whether (certainly in White’s case) you admit  liking their music or not.

By mid-set much head-banging ensued; there was even a small mosh pit in front of the stage and a few folks tried crowd-surfing. If there’s a downside to Fuzz music it’s that it all sounds very similar, especially when songs evolve into extended heavy-metal jams. But who gives a shit when you’re lost in the moment (or in the pit)?