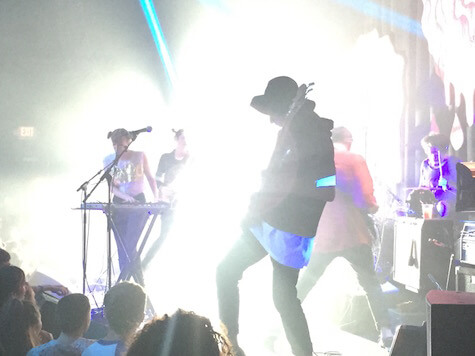 Icky’s music is beginning to fall into three categories — seething acidic rock propelled by Nik Fackler’s screeching guitar (“Silver Tongue,” “Phantasmagoria”), ethereal driftwood stoner shoe-gaze where Derek Pressnall and Sarah Bohling share the vox (“Want You So Bad,” set highlight “Away From You,” which screams to be released as a single) and pure, unadulterated dance tracks (“Living in Fiction,” “In Folds”) that get the crowd moving.

A smart set list that ebbs and flows between those three styles makes the show dynamic and keeps the band from being pigeon-holed as just another dance band. Now blend in the best songs from their debut (“Babes,” crowd-chant-exorcism-humpfest “Sex to the Devil”) and let the party begin.

In fact, Icky Blossoms could become the ultimate party band, taking the helm from The Faint, but to get to that next level they’ve got to reach even further into the crowd to turn their shows into unforgettable, sweat-soaked spectacles. They’re on their way.

One other show note: I was told to pay close attention to opening hip-hop act Both. I saw what was billed as “Both” at the Hear Nebraska Vol. 3 album release show and was less than impressed. That show featured only one member of the duo, who spent that set playing bomb-explosion samples. Well, Friday night I got the full Both treatment and was impressed with their sound, their beats and how they worked the crowd. I’ll wait until I hear their new EP and can check out their lyrics (undecipherable from stage) before I say more…

Maybe it’s the new record or maybe it’s the time they spent on the road with Of Montreal, but Icky Blossoms is blossoming into a full-on arena-rock band.

Whereas no past performance has been less than fun, there has been a tentativeness to their stage shows, an unsureness that bordered on amateur. All that was gone Friday night on The Slowdown’s big stage in front of what looked to be 300 or so fans eager to cut loose.

Adding to their usual energy was new lighting and stage designs — three giant, gaping, bleeding “flowers” that resembled either poppies or a certain portion of the female anatomy were painted on backdrops hung from the rafters.