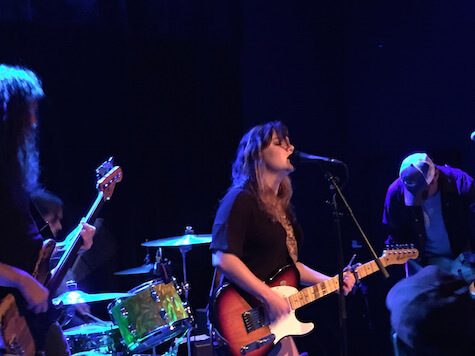 Lydia Loveless looks like she could kick your ass. A fireplug of a woman, she stood in the digital light with her electric guitar hanging from her shoulders and belted out one song after another last night at Reverb like someone who’s been on the road for 10 years straight. She said prior to her set that last night’s show was the final night of filming for a documentary, presumably about her and/or her tour, though the only cameraman was one guy with a DSLR shooting from a corner of the stage as the the band ripped though its set.

Loveless had the C&W/alt-country tag hung on her early in her career, probably because of her slight twang that can easily slide into pseudo yodel and, in fact, does recall Loretta Lynn. And though she’s been compared to Lynn, Stevie Nicks and Patti Smith, she reminded me more of John Haitt, Tom Petty and Lucinda Williams backed by a second electric guitar, a guy who switched between pedal steel and electric 12-string, a drummer and a giant of a bass player who looked like a monster standing next to her.

Playing a number of songs off her most recent LP, Somewhere Else (Bloodshot, 2014), this was my first real foray into Loveless. On indie label Bloodshot, there is a distinct commercial edge to her music, which I could imagine playing in the background of your favorite TV show. Listen most closely and you’ll catch elegant lyrics about love and longing that felt defiant on the upbeat rock numbers and humbling and regretful on the slower pieces. There is something about her music that makes me sad no matter how fast it’s played, sort of how I feel when I listen to Neko Case’s music. Like a soldier who’s just come home from battle, Loveless looked and sounded like a survivor telling war stories, and more often than not, it broke my heart.

I got to Reverb just in time to catch the tail end of Kait Berreckman’s solo electric/acoustic set. Her songs are sweet and sensitive and mostly upbeat despite lyrics that lay bare some of her more private moments in a heart-on-the-sleeve sort of way that reminded me of John Klemmensen (though not nearly as angsty). All the songs I heard were uptempo and played at the same speed, which made me yearn for some pace variety (I’d love to hear her play her closing song at half the speed and turn it into a dirge-like anthem). Maybe the pacing was due to the solo approach — she says she’s better when she’s playing with her band (her words, spoken on stage). I’ll have to find out for myself.