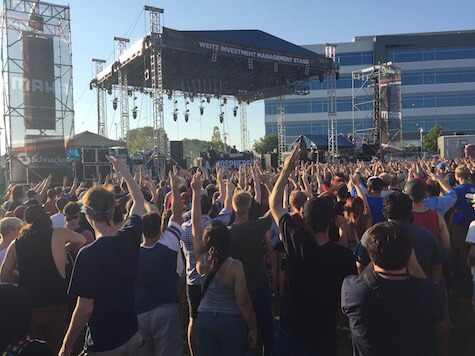 First, read this. It’s the “where do they go next” interview with Lauren Schomburg, who sits on the Maha Music Festival board of directors. It’s a tough question because it’s going to be hard to top this year’s festival, which was held Saturday at Stinson Park in Aksarben Village.

Maha has become a model of how a festival should be run. Actually, it’s been a model of efficiency since its first year in 2009. Even way back then, whether you liked the bands or not, you had to admit the organizers and their army of volunteers had their shit together. Now in the present day, when there’s a band for practically every taste, Maha remains a streamlined, seamless experience, from the overall facility layout to the food offerings to the 501(c)(3) booths to the children’s play area. Even the parking and (in my case) bike lock-up availability was first class. And if you’re a VIP ticket-holder, they even had your restroom needs covered.

First off, this isn’t a comprehensive review of the day. I missed some bands in the middle when (like last year) I needed a break from the blazing sun, heat and humidity and escaped for a few hours of AC and a power-nap (What can I say? Getting old sucks). That, after getting to the festival late, which meant missing opening local acts Both (who I just saw a few weeks ago) and Freakabout (who I can see some other time). I’ve heard a smidgen of grumbling about the lack of a “local” stage at this year’s Maha, but only the smidge-iest of smidgens. While a festival gives local bands exposures to a new audience, it takes away slots for national bands that we’ll likely never get a chance to see in Omaha again.

Bands like Ex-Hex and Alvvays.  Ex-Hex, the post-punk trio headed by ex-Helium frontwoman Mary Timony, rifled through a set of fast, heavy rock songs in lean-rather-than-gritty fashion that was almost matter-of-fact in its presentation. They powered through one song after the next off Rips (Merge, 2014) playing the closest thing to psych-garage rock I heard Saturday, though their music sounded downright tidy compared to the garage bands I’m used to. Maha needs to book at least one dirty, sloppy, snarling, don’t-give-a-shit rock band per festival to get festival-goers a chance to say, “Can you believe they booked those guys/gals?”

Ex-Hex played on the “Weitz Stage” — the big/main stage — while Alvvays played on the smaller Javlin Stage right next to it, and though it didn’t look as impressive, the sound from the smaller stage was just as fierce (though not as loud). While Modest Mouse was the festival’s main draw, Alvvays was the band I was most excited to see. I chased them around SXSW this year, never able to get into the venues because they were already at capacity. Now here they were on an Omaha stage. Their candy-colored summer shimmer-rock was everything I hoped it would be, playful and fun in the mid-day heat. Alvvays played the best tunes off their 2014 debut along with a few new ones that have me looking forward to their next album.

So did the ploy of placing these two high-quality bands so shortly after noon get people to come out to Maha earlier? Only the Maha folks can say for sure, though the crowd of at least a thousand was definitely larger at 2 p.m. than in year’s past. Certainly Ex-Hex/Alvvays are more known quantities than, say, Army Navy and Appleseed Cast, bands that had the early slots back in the day and failed to draw even a few hundred people. I like the ploy, though when you book as many quality bands as Maha did this year, it’s hardly a ploy at all, it’s a necessity. If the festival is only one day long with one band performing at a time, you have to place them somewhere in the schedule or not book them at all.

Which brings us to The Jayhawks, a band that is almost legendary locally for putting on shows that bombed over the past two decades. I talked to more people Saturday who were excited to see Jayhawks than any other band. This year they filled the role of the “indie legacy” act that appeals to dudes in their 40s and 50s, many of whom were pushed against the fence of the VIP section during their set.

Somewhere in my basement is my copy of 1992’s Hollywood Town Hall (American Recordings) that contains at least a few of the songs the band played on stage Saturday, sounding exactly like they did when the band played them at Sokol years ago. Ignore the shaggy gray hair and little has changed. There had been a rumor that Matthew Sweet was going to join the band on stage, but it never happened (though photos of Sweet backstage appeared on Facebook Sunday morning).

It was during the Jayhawks’ set that I made my getaway for a few hours, missing All Young Girls Are Machine Guns, the Omaha Girls Rock band and Wavves, returning just in time for Speedy Ortiz on the small stage. What to say about the set? It was a solid walk-through of the band’s songs off their last couple albums, heavy on Foil Deer (Carpark, 2015) material. Frontwoman Sadie Dupuis has a voice that leans toward Liz Phair on songs that have Phair’s same face-kick confessional quality. Dupuis sings about her life with a knee-groin intensity that recalls ’90s post-grunge post-punk. I love it.

By 7 p.m. the crowd had ballooned to several thousand for Minneapolis indie hip-hop act Atmosphere. The duo of Slug and Ant have been coming through Omaha semi-regularly for nearly 20 years performing a straight-forward, beat-heavy style of hip-hop that takes the lead from ’80s acts and makes it wholly their own. Slug’s rhymes are clear, distinct, personal and in-your-face, which is why the crowd was yelling along with them as they held up their “scissors” (Slug’s word for a peace sign).  No other act got the crowd going at Maha like Atmosphere, a brilliant booking that cut across genres and age lines and added a bounce that the festival sorely needed.

Atmosphere was the perfect launching pad for the evening home stretch, led off by local heroes The Good Life. Tim Kasher and Co. lit up the small stage with a collection heavy on songs from their intense new album Everybody’s Coming Down (Saddle Creek, 2015) as well as the best Good Life material from throughout the band’s 15-year history. I’ve seen TGL play at least a dozen times over the years, but never to a larger crowd.

It was dark by the time Purity Ring took the stage. It became keenly obvious why they were placed so late in the day. The electronic duo of frontwoman Megan James and technology performer Corin Roddick played behind a cascade of multi-colored lights that were draped from the rafters of the big stage and shimmered in iridescent tones in time with their ethereal electronic rock. Their style is dense and gorgeous, ambient and stylish and wholly unique, casting a spell over the massive Maha audience. Again, another smart, unexpected booking that added a level of sophistication to the festival, though the duo’s set went on too long. A little bit of Purity Ring goes a long way since their music is anything but varied. No amount of pretty lights could make it any more interesting.

The crowd was at its apex for Modest Mouse. I strolled out of the VIP area and discovered the grounds had become a darkened chaos of people, but despite the sell-out size of somewhere in the 9,000 range (or so I was told, I still haven’t heard the official number) there was plenty of room to move either through the crowd or around it along the sidewalks that surround the park. Any more, however, and things could have gotten ugly.

Modest Mouse came on late (maybe because they had to tear down all of Purity Ring’s Christmas lights?), and I was told were going to play late as well. For me, they were one of the least interesting bands on the bill, having seen them do a stand-around set years earlier at Sokol. Not much has changed in their performance style, though their music certainly has changed. Somewhere in the past decade, Modest Mouse lost its weirdness, swaying north of the caustic noise that made The Lonesome Crowded West (1997, Up) a masterpiece. When they discovered thicker, more straight-forward beats and melodies, they lost their edge and (of course) become much more popular. So who can blame them? Had they kept on their initial trajectory they wouldn’t be headlining festivals.

Still, the crowd was definitely into them (at least the folks near the stage) as the band played through their catalog of recent releases. I didn’t stick around until the end, opting to get a head start to O’Leaver’s where Speedy Ortiz had announced they’d be playing an unofficial after party.

Which brings us back to how we started this tome and the question that was on everyone’s minds as they walked back to their cars (or bikes) after a long, hot day in the park: What can Maha do to top this? Just having another sell-out ain’t gonna cut it. In fact, a sell-out is the least they can do to match this year’s success.

As the article pointed out, Stinson’s already booked for 2016. The most common suggestion is expanding Maha to two days, effectively doubling your volunteer needs but gaining some cost efficiency associated with staging, etc. Could Omaha support a two-day indie music festival or would Maha have to expand the stylistic breadth of bands to include non-indie stuff? Maybe instead of two days, Maha should stay at one day and book a next-tier indie band like Arcade Fire, Beck or Wilco and either raise ticket prices or find bigger sponsors to cover the increased booking costs.

My vote would be for Maha to add a Friday night event to the all-day Saturday event (a suggestion which sounds strangely familiar).

The real question: What do the folks who run Maha want Maha to become? What’s their definition of success? What’s the ultimate end-game? How far can they push it before Maha bleeds too far away from its original vision? Lauren outlined where she wants Maha to go. What’s the vision for the rest of the Maha team?  And, by the way, there’s nothing wrong with keeping it just the way it is (no matter what Tim Kasher says).

As I was saying, there were a couple Maha after parties. The official after party was at Reverb. The unofficial party was at O’Leaver’s where Speedy Ortiz finished off the night playing a ferocious set that was different from their Maha set list, crystallizing the difference between seeing a band at a festival and seeing a band in a club setting.

Playing to a crowd of 60 or 70 that included members of Maha bands Alvvays and The Good Life, Dupuis and her band gave a performance that was as dynamic and intimate as you would expect, wearing a flower in her hair given to her by a fan who stood right in front of her.  It was a stark reminder that no matter how much fun festivals may be, they’ll never be a replacement for seeing a band at a small music venue — one of the major advantages of loving indie music.