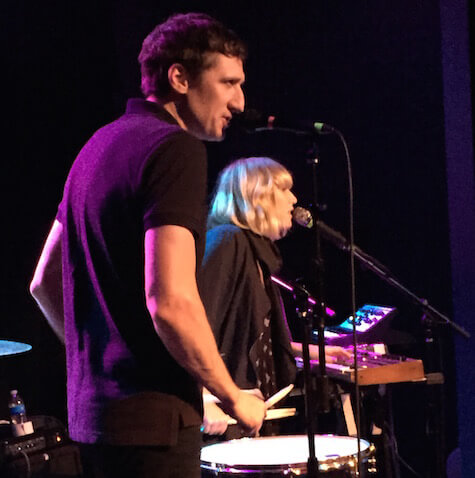 I had no intention of staying at Reverb last night (July 2), certainly not long enough to see Mates of State. But the opening bands pulled me through almost to the end.

How to describe the twin sisters that make up opening band Good Graeff — guitarist vocalist Brooke and cellist Brit Graeff?

Bubbly? Playful? Fun-loving? Giddy? How about precocious? Or fetching? Let’s just settle for “darling,” and “talented.” The duo, along with a bass player and drummer who were mainly in the background, played a set of up-tempo love songs (introduced by Brooke as love songs, though she said she’s never been in love. Pshaw!) that were catchy and cute and hard not to like.

They count The Pixies and Tegan and Sara among their influences and are at their best when channeling those bands’ more percussive/less linear moments. When they try their hand at modern, streamlined pop they sound like watered-down Sheryl Crow. Fortunately, those moments were few and far between.

As entertaining as their music was their between-song patter. Led mostly by Brooke who, if this music thing doesn’t work out, she could pursue a career in topical stand-up comedy. When Brit joined in the pair sounded like the Sweeney Sisters. Or maybe the Pigeon Sisters. Now I’m reaching. Watch for their new EP, Good Job Go, out July 10.

They were followed by Hey Marseilles, who, for whatever reason, I keep confusing with Hey Mercedes though the bands have nothing in common except the Hey. The six-piece, who I’d never heard before, sounded like a chamber-pop version of Guster, Death Cab or Jeremy Messersmith, featuring pure indie rock songs augmented with viola and cello.

HM frontman Matt Bishop has a crisp, non-affected vocal style that doesn’t outshine the rest of the band. You get the sense he’s just part of the band instead of an irreplaceable centerpiece. Great stuff worth checking out if you’re into indie pop that relies on strong, complex melodies (and who isn’t?). They also have a new album coming out in the near future.

I was planning on leaving halfway through HM and skipping Mates of State altogether since I had to work this morning, but HM kept my attention with the strength of their last three songs, which blended nicely and finished with a crescendo. I figured what the heck, might as well hang ’til 11.

Pitchfork crushed their new Barsuk-release EP, You’re Going to Make It, with a 3.9 rating saying it “makes life sound like one big bouncy castle of fun, and that unquestioned contentment renders Mates of State musically anonymous.” Maybe so, but I doubt the duo were targeting the Pitchfork reader when they wrote the album. Instead, they were targeting people like 100 or so who crowded Reverb, 80 percent of them women. The first three rows of people standing hear the stage were mainly 20-something women pseudo-dancing (i.e., shaking their shoulders) and singing every word. These were happy people, having a happy time, which doesn’t describe the typical glum, too-serious Pitchfork reader.