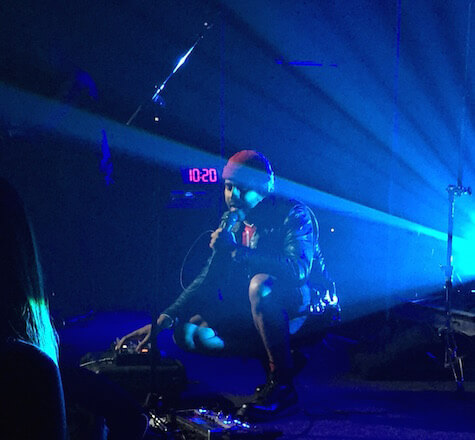 The last time Twin Shadow came through The Waiting Room (almost three years to the date of yesterday’s show — Sept. 10, 2012), the band performed as a trio in front of around 150, playing their urgent dance songs to a darkened, smoke-filled stage.

Last night’s performance at The Waiting Room showed how much the band has grown in three years, though their core sound has changed little. At the center of Twin Shadow is George Lewis, Jr., the songwriter and vocalist and guitarist, surrounded by three musicians who spent most of the time on synths, though two of them picked up guitars for a few harder numbers. Nary a drum was scene as most of the rhythm tracks were pre-programmed, with one player adding a few manually created electronic drum fills, and Lewis himself crashing down on cymbal that towered behind him like a slam dunk.

The music was dense, gorgeous electronic rock that leaned more toward classic FM than New Wave or post-punk. In fact, there were times last night when the music came dangerously close to (Dare I say it?) yacht rock territory. The slower, shoulder-pad ballads sounded like something pulled from a John Hughes or early Tom Cruise film. Other times I was reminded of Escape-era Journey and even, yikes, Toto.

Lewis has a rich, soulful voice that Michael McDonald would nod toward with admiration. We’re talking American Idol-quality tonsils, not the usual warbling indie-rock mewing I’m used to. And the few times he picked up an ax proved that he’s one helluva guitar player. The upbeat dance numbers were Twin Shadow’s sweet spot. Songs like the infectious “Old Love/New Love” off the new album got the zombie-eyed crowd of around 100 bouncing, as did set closer and Twin Shadow staple “Five Minutes” off breakthrough album Confess. Unfortunately, slower ballads outnumbered  dance moments three to one last night.

On the whole, it was a solid 45-minute set — a much better set than the droll half-hour I sat through at SXSW this past April when the band played under a giant scrim that looked like a mosquito tent. And while there were plenty of strobes and smoke last night, the best special effect was still Lewis’ own Ya Mo B There voice.