Hip-hop artist Logic will be performing with Joey Bada$$ and Big Lenbo at the Pine- wood Bowl in Lincoln on Sunday, August 13th at 8 pm. Logic has been an up and coming star ever since his mixtape, Young Sinatra. He is touring for his third studio album, Everybody. In its first week, Everybody hit #1 on Billboard’s top 200. With a fresh flow, Log- ic’s music veers towards the spiritual in lieu of the traditional hip-hop fare. Joey Bada$$ also dropped an album earlier this year, All- Amerikkkan Bada$$. The album is heavily po- litical, with an in-your-face attitude to it that invokes the best of the likes of hip hop leg- ends like NWA. Tickets are available online. 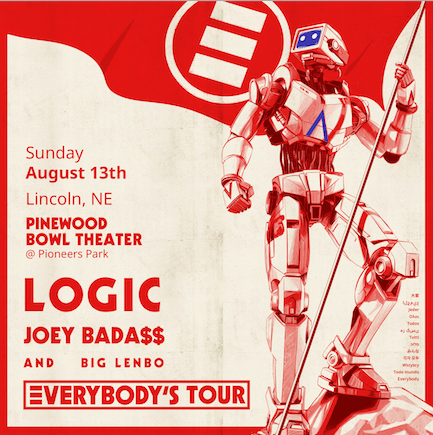