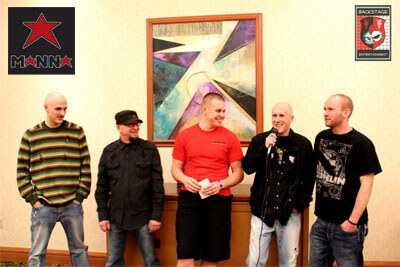 On Friday, March 9, 2012, the local guys in the band MANNA played at Harrah’s Casino inside Stir Live & Loud. Performing as the openers were 3 Day Meat Sale and The Further. There were quite a few people inside Stir Live & Loud as it showed there were many fans that have been supporting MANNA and were looking forward to the night.

MANNA is just off their latest album release in October of last year called “Chronic Hives.” Backstage Entertainment had the chance to interview the guys right before their show. Although we were delayed by security because of issues recording inside of a casino, we still got to ask them some questions after Harrah’s approved us. When asked, MANNA said the top couple songs they would like the fans to listen to first if you’re new to hearing them are, “Who Am I?”and “No Applause Here.”

You can check out the interview and photos from it below: