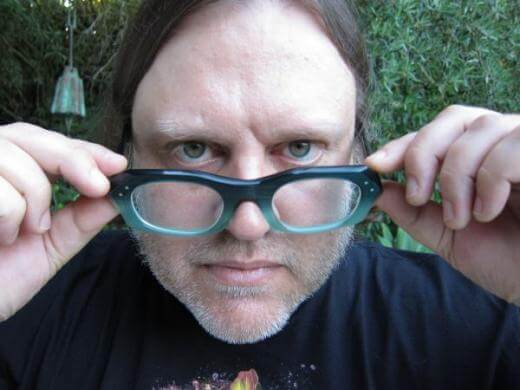 Matthew Sweet is back.

And not just in a musical way, but literally. He’s back here, in his home state of Nebraska. Sweet and his wife, Lisa, moved to Omaha in the winter of 2013 after spending 20 years in Los Angeles. He bought a house in which he built a small studio (that he says isn’t really a studio) and with the help of a Kickstarter campaign began to pour the foundation for what will be his first new album of original material since 2011’s Modern Art.

What direction that new album will go is still a mystery to Sweet, who always has taken the road less traveled when it comes to his musical career, and it’s made all the difference. Sweet reinvented power rock in the 1990s with the release of one of the most memorable albums from that decade, 1991’s Girlfriend. The collection spawned a top-10 hit with the title track, which was nestled among 14 other songs just as good, from the grinding guitar-driven “Devine Intervention” to the soaring “I’ve Been Waiting” to the country-tinged heartbreak of “Winona” — every track on the record was a certified full-blown, windows-down sing-along.

Girlfriend was followed two years later by the harder, psychedelic sound of Altered Beast and the power rock of 1995’s 100% Fun, which featured guitar work by Richard Lloyd of Television. From there, Sweet released six more albums of original material, along with three cover albums performed alongside The Bangles’ Susanna Hoffs. While doing all that he also was a member of supergroup The Thorns and Austin Powers’ band Ming Tea, and last year, alongside Lisa, was a research consultant on the Tim Burton film Big Eyes, that traced the life of ’60s West Coast artist Margaret Keane.

Somewhere along the way Sweet must have gotten home sick. What drew him back to The Good Life state? We caught up with Sweet Feb. 24 to find out.

Matthew Sweet: We had a house in Los Angeles we bought a long, long time ago and were there for 20 years. We don’t have any kids and didn’t have any family out there, and we sort of always felt like we’d sell our place and move from right in the middle of Los Angeles, where it’s really expensive.

When the (housing) market came back we looked throughout California and the West Coast — we didn’t leave because we didn’t like it. We were excited to do something more radical, and moving here made a lot of sense because we both have a lot of family here. Lisa is from Scottsbluff. Both of us don’t come to Nebraska that often, and so it was a chance to get to know our families a little more before we become the elderly relatives that no one knows about.

My mom passed away in September and we were here for that, but I’m very much a loner and a home body, so in a way it doesn’t matter where I am. The weather here is the really awesome thing, how the weather changes and how much more you feel it. In Los Angeles there are times when it’s gorgeous, but there’s also a lot of time when it’s really hot and where it’s a monotony of unbearable things. But a lot of that is life itself no matter where you go.

The Reader: Plus these days you can make music anywhere. I hear you have studio in your house here.

Sweet: It’s a studio but not a real studio. I’ve been writing the new record and did a Kickstarter campaign for it last year. I’ll record the album in my house. When we do the Hear Nebraska event, I’ll keep some of my guys from my band here and we’ll start the recording.

The Reader: The Kickstarter campaign was interesting. You raised more than $55,000 for recording the album.  Why Kickstarter?

Sweet: I was curious what it would be like. I talked about trying it for a long time. It seemed like time to try it. I had a hard time making myself do it because I’m not that outgoing, which sounds weird doing what I’m doing. I’ve never been a look-at-me kind of person. It worked out well time-wise because I went on the road after we launched it and could talk about it. I ended up selling a lot of 30-minute Skype talks (as a campaign premium). In reality it could take me three solid months to do all those. I think maybe I wouldn’t do that again.

But it’s empowering to think that you can have an idea and there’s some magical place where people can believe in you and help make something happen. Some people in the music business have polarized ideas that Kickstarter is just begging or whatever, but I don’t really see it that way. If you’re going to do a project you have to pay for it somehow, from somebody. Why not from the people who actually like what you’re doing?

The Reader: The last time I interviewed you was 10 years ago. You prophetically said that things are going to change in this business, and that if you could make your music and just give it away and somehow make a living that would be the best scenario. Well, we’re almost there with the “give it away” part when you consider how much Spotify pays for streaming.

Sweet: The big concern early on was the conflict between commerce and art. Now there’s just no commerce, comparatively. We didn’t know how good we had it. We’re all just micro-business owners now, trying to do our thing, you know?

The Reader: Which is where Kickstarter comes in.

Sweet: I especially want to please all those people (who took part in Kickstarter), more so than I would a business man. With Kickstarter I feel like I can’t be willy nilly about it. I want to focus and deliver something whole. They’ve already bought the record, so they probably would like it to be decent, you know?

The Reader: Last year you did an intimate show with your band at tiny O’Leaver’s, which has a capacity of around 100. What was that like?

Sweet: I love that we were playing to people standing and sitting right in front of us. We were coming off a grueling tour where there was a lot of long drives and our van broke down and we could never get another one so we ended up traveling in two vehicles. When we landed here I felt like I was going to collapse because we knew we had to go to Chicago after we did our shows here. That show was kind of a blur. I remember it being good, but didn’t know if I was good. I really wanted to be good because I was playing in Nebraska.

The Reader: Tell us a little about your contribution to the film Big Eyes and collecting pop art.

Sweet: We had a couple Margaret Keane prints in the early 90s. When we got interested in her art it was the inability to find out anything about it that made it interesting. A lot of our collection is made up of artists who were working around Keane or working around that time in the late ’50s and early ’60s in LA and San Francisco, where Margaret was doing her work.

We thought it would make a good movie for a long time, and we told a lot of people and eventually the folks we hoped most would make the movie did. We went up to Vancouver to see some of the filming right before we moved, and I swear once the movie got filmed, we thought ‘Our work was done here in Los Angeles.’

The Reader: Give us an idea what your new album will sound like.

Sweet: I want to do it really old school — collect a bunch of songs, make some demos, pick the best of those closest to me and record them. I don’t get a sense of what (the album) is like until I’m into recording. It’ll be simple; it’ll be a good variety of things, but will feel like a whole effort. It’ll feel like a human being and be brave enough to say something with feelings. I love playing electric guitar and making gnarly guitar riffs, which I could do all day. That’s why I’m trying to not to just write a bunch of riffs. I want them to be songs. The fact that I’m waiting to combine all those elements makes it fun for me.

The Reader: You said in 2004 that Girlfriend was sort of an albatross when it came to dealing with record labels. You also said ’92 and ’96 were were career peaks, but that they weren’t necessarily the best times in your life. How do you look at back those times now?

Sweet: At the time I was really not able to see the global picture of my life and what kind of person I was. It was this turbulent, kind of crazy thing. I worked very hard. There was always something to do and somewhere to go, and someone we had to talk to or sing for. And when I say ‘we,’ I really mean ‘me.’ I enjoy playing live a lot more now. Back then it was more of a crap shoot. It was just hard. It was what it was.

Girlfriend has been so great. It’s been great to connect with people. It’s awesome how much they care about it. It’s touching and rewarding to sing it for people, and it’s fun for me. The great thing is I never felt like ‘Oh God, I have to do Girlfriend,’ not even the song. It feels like me when I sing it.

The 20 year anniversary of Girlfriend made me think, wow, I’m actually grown up and older and I’m through the hardest part in a way. It’s always hard being a musician, I mean just the kind of person you probably are emotionally means you’ll have a hard life. And then having it as a career is also so perilous . But when you get older, you have a leg up that you don’t have when you’re young. The older I got the more I liked it, and the further you are from anyone telling you what to do.

That’s what I loved about music when I was just a kid in Nebraska in the closet, embarrassed to have anyone hear me sing, trying to make up songs. When you find something that you love, if you’re lucky enough to have that, it stays very dear to you in a deep kind of place. And understanding life and seeing where that feeling came from is very powerful when you get older.

When we play shows and people come and say, ‘My dad played your stuff all the time,’ that’s awesome. When we go out and see the crowds from back then, it’s like we all grew up. None of us have anything to be ashamed of because it happened to all of us. In a way that’s a great thing about life — we’re all headed to the same place.

Matthew Sweet plays with So-So Sailors Saturday, March 28, at The 1200 Club inside the Holland Center for Performing Arts, 13th and Douglas streets, Omaha. Showtime is 8 p.m. General Admission is $45; VIP tickets are $100. The performance is a fundraiser for Hear Nebraska. For more information, go to hearnebraska.com.