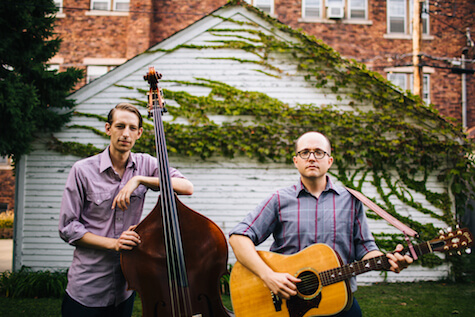 On the surface, Dan McCarthy is a throwback artist.

Whether standing in front of a microphone with an acoustic guitar slung over his shoulder or sitting behind the wheel of an upright classic 88, McCarthy’s music, his style, reflects an era defined by the likes of Scott Joplin and Hank Williams rather than any modern-day composer.

“I knew the Scott Joplin stuff before I knew old country,” McCarthy said via cell phone from Brooklyn, where he’s visiting his brother’s family and taking in some local musicians in the evenings. He pointed to the six-album Anthology of American Folk Music as his primary musical influence. The 1952 compilation, comprised of 84 American folk, blues and country recordings, was rereleased as a six-compact-disc set in 1997 by Smithsonian Folkways Recordings.

Echoes of those recordings are heard throughout McCarthy’s own 7-album catalog, released under the name McCarthy Trenching, that reaches back to 2003 up to his latest album, More Like It, whose release is being celebrated with a pair of parties — Nov. 5 at Zoo Bar in Lincoln and Nov. 6 at O’Leaver’s in Omaha. The 10-song collection is loaded with Hank-style walking guitar melodies and chiming piano tunes that recall the best of Randy Newman, all backed by the other member of McCarthy Trenching, upright bass player James Maakestad.

But as down-home authentic as the music sounds, it’s the lyrics that bring the songs into the modern world. The snarky “Mean Things on My Mind” is a rant against everyday annoyances, like the a-hole who talks on a cell phone and eats ice cream while driving. McCarthy caps off the tune with a sentiment we’ve all felt at one time or another: “All my wishes will come true / As long as everybody dies.”

“That one is pretty much a true story of that day in Omaha,” said McCarthy, who was 24 at the time. “I went to a friend’s house and did see Air Force One flying over. I think that’s a true fact.”

Then there’s the gorgeous, piano-driven geology lesson “Ogallala Aquaifer” that features McCarthy singing the history of the sixth Great Lake that lies beneath the Great Plains of the United States. It’s a perfect counter argument to anyone arguing for the construction of the Keystone LX Pipeline.

“That’s what it was written for,” McCarthy said, explaining that the song also was released on Stopping the Pipeline Rocks: A #NoKXL Benefit Album, a project put together by anti-pipeline organization Bold Nebraska along with culture & arts org Hear Nebraska and Red Rebel Media. It was through that project and performing at the Neil Young/Willie Nelson Harvest the Hope Concert that McCarthy met Mike Semrad. A member of classic Nebraska band The Bottle Tops, Semrad runs Sower Records, who is releasing McCarthy’s latest.

More Like It was recorded at Omaha’s ARC Studios by Ben Brodin over the course of five days — two days to record tracks, two to mix and one day for cushion. Among the musicians who joined McCarthy in the studio were vocalist Pearl Lovejoy Boyd of Outlaw Con Bandana, who added backing vocals to two tracks, and Maakestad, who has been playing alongside McCarthy for six years.

“I saw James sing in Bear Country a few times,” McCarthy said, referring to the now-defunct country rock band that featured Maakestad. “I invited him to come down to O’Leaver’s and play a show with me. and was taken with him. I asked him what else he played, and he said he studied classical bass in Lincoln. I knew right then and there I wanted him to play that with me.”

McCarthy knows first-hand how hard it is to play the upright bass. The Omaha transplant, originally from Shelby, Iowa, took piano lessons from the age of five. He never played in a band until reaching Omaha after receiving his degree in English literature from Brown University. His first band gig was playing upright bass with Bill Hoover’s local American Folk revival group The Short Timers.

“The first rock band I was in was with Ted Stevens (of Lullaby for the Working Class and Saddle Creek band Cursive), who asked me to play in Mayday,” McCarthy said.

He quickly earned a reputation for being a solid musician and sideman, playing either guitar or piano in a number of local bands, including Mal Madrigal, So-So Sailors and The Mynabirds, while at the same time working on his own music. His songs are heartfelt, touching, often funny snapshots of his everyday life, sung in a quiet voice of an old friend.

On top of that, McCarthy’s been known to play ragtime piano at Pageturners Lounge on 50th and Dodge just for fun. “I’m not ready to be a total ragtime head,” he said. “To me, it’s the right balance of being difficult and entertaining.”

That could be the perfect metaphor for how he approaches his career. So how does he define success in the music business?

“That’s a good question,” he said with a pause. “I hope this is not cheesy, but I’d settle for having other songwriters and musicians I respect listening to what I do and paying attention and recognizing it. That’s validating to me. Not album sales or ticket sales. I love when there’s a crowd laughing at the right places.”