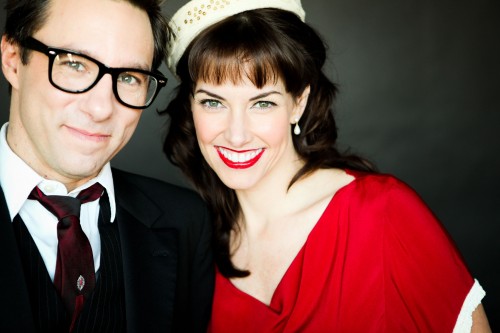 Jim Suhler & Monkey Beat are a don’t-miss band that always puts on an electrifying show. They gig Wednesday, Jan. 14, at Lincoln’s Zoo Bar and Thursday, Jan. 15, at The 21st Saloon. Both shows are 6-9 p.m. Dallas-based Suhler and his band fill the dance floor and rock the house with their genre-spanning roots music that ranges from blues to rock to roots. The band is touring in support of their latest CD, Panther Burn. See last week’s column for more. Suhler’s “day job” is working as a guitarist in George Thorogood’s band. Blues harmonica player and didgeridoo artist Harper opens the Omaha show, 5 p.m. See jimsuhler.com and harper.biz.

Kansas City’s vibrant old-school swing-Americana artists Victor & Penny bring their Loose Change Orchestra to Lincoln’s Crescent Moon Coffee, 140 N. 8th in the Haymarket, this Friday, Jan. 16, 8 p.m. The ensemble makes swingin’ acoustic “antique pop” music rooted in the 1920s and ’30s. They are celebrating the release of their new CD, Live at the Living Room Theatre. I got the opportunity to see them in K.C. last September opening for swing crooner Johnny Boyd. Their music features blistering acoustic string work and wonderful vocals. Check them out at victorandpenny.com and go hear them at this gig. The band has a lot of big plans for this year and has been selected as one of the official showcase artists at the prestigious 2015 Folk Alliance International (FAI) Conference, coming Feb. 18-22 in K.C.

Hector Anchondo Band represents the Blues Society of Omaha in the 31st International Blues Challenge next week in Memphis, TN. The band plays a send-off party Friday, Jan. 16, 6-9 p.m. at The Hive. Admission is free but donations will be accepted to help the band with their travel expenses to Memphis. The International Blues Challenge will fill Beale Street with hundreds of blues musicians from around the world. For more details see blues.org.

Josh Hoyer & The Shadowboxers saw their second CD, Living by the Minute (Silver Street Records), hit the international market with a release on iTunes Tuesday, Jan. 13. The fine disc sizzles and stomps, featuring Hoyer’s distinctive, soul-drenched vocals and a rich, horn-driven sound that harks to some of the best timeless soul-blues while being thoroughly modern. The disc features Benjamin Kushner’s fiery, emotive fretwork and Justin G. Jones on drums. This band has got soul to spare and makes a joyous, righteous noise.

Somethingelsereviews.com says “Living By The Minute…is a powerful soul statement, combining the sheer power of Otis Redding, the funk of James Brown and the social immediacy of Puzzle People-era Temptations.”

Josh Hoyer & The Shadowboxers take the stage at Lincoln’s Zoo Friday, Jan. 23, 9 p.m. before hitting the road for a tour that will take them through Texas, Louisiana, Florida, Atlanta, Chicago and more. See joshhoyerandtheshadowboxers.com. WRITER’S NOTE: The Parliament Pub show scheduled for Saturday, Jan. 17, was cancelled by the venue.

Thanks to generous fans, the Kris Lager Band got back on the road to finish their January tour after their van died in Utah. They are still raising funds for a more permanent solution to their transportation needs. They’ve got new music out too from their collaborations with The Monophonics’ Kelly Finnigan, Tab Benoit and Andy Frasco. Keep up with the latest at facebook.com/krislagerband.com.

Speaking of the Zoo Bar House Band, the ensemble features a rotating cast of some of Lincoln’s finest players and they hit the stage at the Zoo every Monday, 7 p.m. Go check out some great blues played live and local.